Estonia is fit to adopt the euro, EU Commission says | Europe | News and current affairs from around the continent | DW | 12.05.2010

Estonia is fit to adopt the euro, EU Commission says

Estonia is set to adopt the euro and plans to replace its currency, the kroon, on January 1, 2011. The move would make the Baltic country the 17th eurozone member. 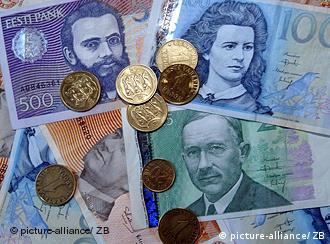 Estonia's kroon: soon a thing of the past?

The European Commission on Wednesday said Estonia's economy is strong enough to join the euro zone.

Estonia plans to switch to the shared European currency on January 1, 2011.

The Commission had examined Estonia's debt, deficit, inflation, and interest levels. Olli Rehn, the EU commissioner for economic and budgetary affairs, said the country had achieved "a high degree of sustainable economic convergence" and was therefore ready to adopt the euro.

"To ensure that the adoption of the euro is a success, Estonia must pursue its efforts to maintain a prudent fiscal policy stance," he said.

He urged Tallinn to "remain vigilant and react early and decisively" if problems emerge.

The Commission's positive assessment came in the wake of an enormous European bailout for Greece, which shed new light on the importance of countries taking inflation-control measures. Countries are concerned that massive debt problems in the eurozone could make Brussels wary of taking on a new member.

According to Rehn, "the assessment and our proposal is also a strong signal about the euro area and to the EU more broadly," testifying that sound economic policies such as those adopted by Estonia "generate concrete results."

Estonia has had an average budget surplus of 1.8 percent of gross domestic product between 2002 to 2007, deteriorating to a deficit of minus 2.7 percent in 2008 and minus 1.7 percent in 2009 as a result of the economic crisis. That is still well within the eurozone's threshold of 3 percent.

The Brussels-based EU executive said the country's "price performance [is] sustainable" as average inflation fell to minus 0.7 percent in the 12 months to March 2010. But it warned that "Estonia" will need to remain vigilant to keep inflation at a low level."

In order for Estonia to be finally welcomed into the eurozone, Wednesday's approval will have to be confirmed by the EU's finance ministers in July. So far, no positive recommendation by the Commission on eurozone enlargement has ever been contradicted by EU member states.

Estonia shifted rapidly from a communist command economy to the free market after breaking from the crumbling Soviet bloc in 1991. The 1.3-million-strong country had hoped to adopt the euro in 2007, but failed to meet the inflation-control criteria at the time.

The European Commission is to unveil a new strategy for avoiding crises like the one that has shaken Greece and led to massive speculation on the value of the euro. (12.05.2010)

Europe could profit from US pressure on China's currency

A US decision whether to label China a currency manipulator in an official report due next month could have international consequences. Europe could profit from a stronger yuan, but has so far kept mum on the issue. (19.03.2010)

Estonia has fulfilled the budget criteria for eurozone entry (12.05.2010)