Brussels to unveil plans for tougher rules to protect euro | Europe| News and current affairs from around the continent | DW | 12.05.2010

The European Commission is to unveil a new strategy for avoiding crises like the one that has shaken Greece and led to massive speculation on the value of the euro. 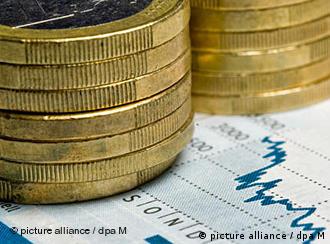 Brussels believes Germany's tough debt-reduction measures, enshrined in the constitution, could be a model for other EU states.

In the Wednesday edition of the German weekly, Die Zeit, Rehn said Brussels should have greater powers and be able to monitor the national budgets of EU nations. He said regulations must be put in place to make this possible.

"We want governments to send their budget outlines to Brussels for review before they are approved by their national parliaments," Rehn said.

"We can then see early whether a country is adhering to the Stability and Growth Pact. If not, we would intervene," he said. Berlin has rejected such measures, however, saying it would impact on its budget sovereignty.

Many eurozone nations in trouble - in particular Greece, Spain, and Portugal - have accumulated budget deficits vastly exceeding the three percent of gross domestic product (GDP) permitted by the Stability and Growth Pact. The pact is meant to ensure the stability of the economic and monetary union. 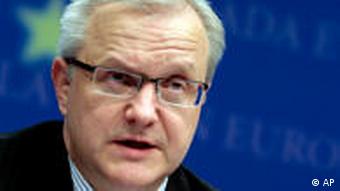 Rehn also told Die Zeit that he believed Germany's plans for debt reduction could serve as a model for other EU nations.

In 2009, Berlin passed a constitutional amendment making it illegal for the federal government to run structural deficits more than 0.35 percent of GDP per annum from 2016, while from 2020, Germany's federal states will not be allowed to run any deficit at all.

Germany this year is expected to reach a record debt of more than five percent of GDP, but has plans to start reducing this from 2011.

Greece, which has a crippling budget deficit of nearly 14 percent of national income, this month became the first EU nation to receive billions of euros in a rescue package to prevent it from defaulting on its debts.

"It doesn't touch Greece alone," Rehn said in Brussels earlier this month. "It has to do with the eurozone as a whole."

The EU commission has warned nations to rein in their spending, including France and Italy, which until now have held back from introducing unpopular budget cuts.

The economic turbulence in some EU nations has led speculators and investors to target the euro, which has in the past weeks fallen to its lowest levels against the US dollar in more than 14 months. 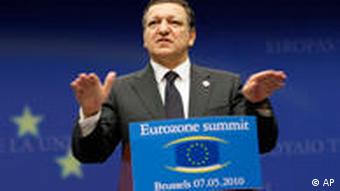 EU finance ministers on Monday announced a rescue package of up to 500 billion euros ($632 billion) to protect the euro, as market speculators increasingly targeted the currency and began betting on its collapse. The International Monetary Fund is to provide a further 250 billion euros.

"We will defend the stability of the euro at any price," Rehn said earlier Monday.

Meanwhile, in a rare interview, John Taylor, a hedge fund speculator who made big profits in 1992 when speculators bet against the British pound, told Bloomberg TV that a fall in the value of the euro was inevitable.

"The euro is a poor design and can't continue like this. It's quite easy to see that the euro will become much weaker," Taylor told Bloomberg TV.

Micheal Leister, a strategist at the WestLB bank in Dusseldorf, said hedge fund speculators may well make big profits by betting on currency fluctuations, but that they alone couldn’t shake the euro.

"In times like this, when investors start panicking and liquidity is getting tight, one can make massive profits. But the jury is still out on whether that is the cause of all the current troubles."

Eurozone wants tough mechanism to defend stability of the euro

European Union leaders are working around the clock to create a new measure to defend the euro before financial markets reopen on Monday. EU finance ministers will meet on Sunday to discuss the plan. (09.05.2010)

At the Munich Economic Summit, the head of the ECB called for a strong sense of direction to lead Europe out of dire financial straits due to debt trouble in Greece. (29.04.2010)