Turkish Prime Minister Recep Tayyip Erdogan has hit out at his critics in Turkey and abroad in a speech in the German city of Cologne. His visit triggered a large street demonstration. 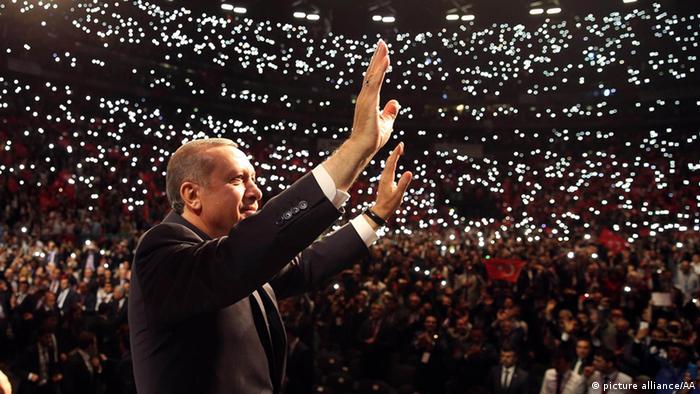 In his speech on Saturday to thousands of his supporters in the western German city of Cologne, Erdogan accused critics of his government at home and abroad of repeating "lies and defamation."

He described claims that Turkey had no press freedom or that he himself was a dictator as "black propaganda" spread by people wanting to harm the country.

Erdogan also said it was wrong to criticize the Turkish police for their treatment of demonstrations, as such protests were "terrorist acts."

German media also came in for their share of criticism from Erdogan, who accused them of insulting him after the recent mining disaster in the Turkish town of Soma. This was an apparent allusion to a headline in the German news magazine "Spiegel", which quoted a miner who said Erdogan should "go to the devil."

The Turkish premier went on to say he would do everything in his power to bring those responsible for the disaster to justice.

Erdogan and his government have come under fire for what was perceived as an unfeeling response to the accident, as well as for being responsible in part for lax safety standards at Turkish mines.

In his speech, the prime minister also called on Turks in Germany to integrate and learn the German language, but not to assimilate.

"Assimilation? No. I have said this before and I'm saying it again - we don't compromise our language, religion and culture," Erdogan said.

Erdogan was speaking at a 10th anniversary rally of the Union of European Turkish Democrats (UETD) in Cologne's Lanxess Arena.

Earlier on Saturday, tens of thousands of demonstrators marched through the streets of Cologne to protest at Erdogan's visit, some carrying banners accusing him of being a dictator. Others wore mining helmets as a sign of their objections to Erdogan's handling of the Soma disaster.

Cologne is a major center for the three million Turks or people with Turkish roots living in Germany.