The number of people killed in the blasts in Bata more than tripled from the initial estimates. The president attributed the explosions to "negligence" and ordered a probe into the incident. 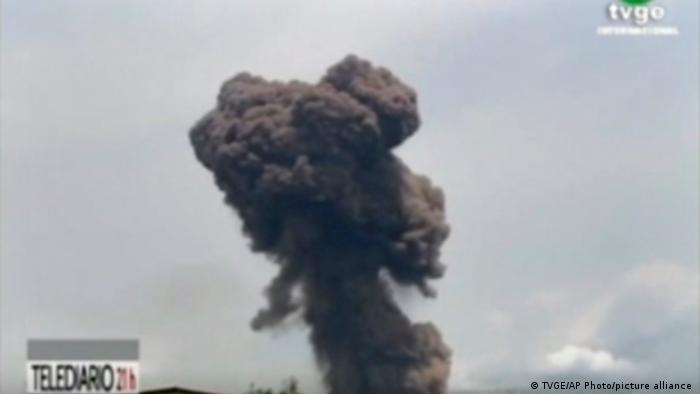 At least 105 people have died from injuries sustained in a series of explosions in Equatorial Guinea, state television said on Tuesday, two days after the blast.

Initially, the authorities estimated 31 people were killed in the Sunday afternoon blasts at a military complex in the coastal city of Bata. Both civilians and military personnel were among the victims.

At least 615 people were injured, out of which 299 remained hospitalized, the health ministry wrote on Twitter, citing the vice-presidency.

Television station TVGE showed Vice-President Teodoro Nguema Obiang Mangue visiting a hospital in Bata where the victims of the blast were being treated.

Local media reports showed children being pulled out from underneath the piles of broken concrete and twisted metal, as well as bodies wrapped in sheets lined up on the side of the road.

The health ministry also tweeted earlier in the day that it had prepared a "mental health brigade" made up of psychiatrists, psychologists, and nurses to attend to the victims of the explosion in Bata.

"Because the damages are not only physical but also mental," the ministry said.

What do we know about the explosion?

A fire near a weapons depot at the city's Nkoantoma Military Base is believed to have caused the blasts.

President Teodoro Obiang Nguema, the vice president's father, attributed the blasts to "negligence and inattention" related to the handling of dynamite.

Depots holding explosives ignited "when neighbors at nearby farms lit fires," and flames spread to the barracks, he said.

He said the explosion had damaged nearly all homes and buildings in Bata, a city with just over 200,000 residents, adding that he had ordered a probe to hold those responsible to account.

Hospitals in the city have been overwhelmed and were pleading for blood donations.

The oil-producing nation is under economic duress, facing a double shock because of the coronavirus pandemic and a drop in the price of crude oil, which accounts for about three-fourths of its revenue.

"Following the devastating explosions in Bata yesterday...Spain will proceed with the immediate dispatch of a shipment of humanitarian aid," Spanish Foreign Minister Arancha Gonzalez Laya tweeted.