On the Day of the Imprisoned Writer, rights group PEN International remembers writers who have been jailed for their work. DW asks former imprisoned author Enoh Meyomesse about his life after release. 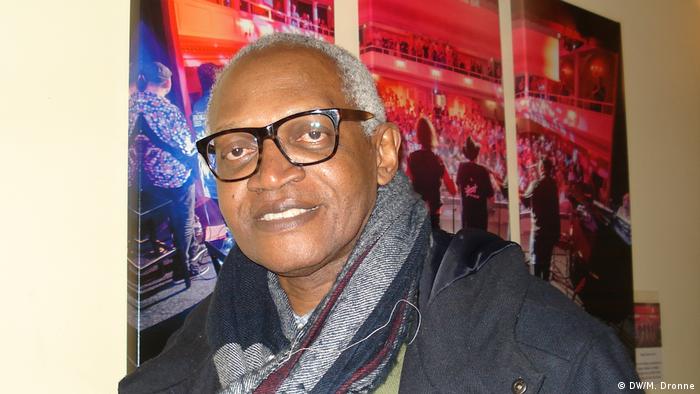 Enoh Meyomesse, born in 1954 in Cameroon, is a poet, novelist, playwright, historian and political activist. He studied political science in Strasbourg and Paris and returned to his home country after graduation. He made a name for himself as a writer and published a remarkable number of poetry books, novels, plays and political essays, while working on a monumental history of Cameroon. Some of his books were censored due to criticism of the regime.

At the last presidential election 2011, Meyomesse unsuccessfully challenged President Paul Biya, in power as head of state since 1982. Meyomesse's social analyses and initiatives lead to several arrests, and eventually jail time. In 2013, the imprisoned Meyomesse received the Oxfam Novib/PEN Award for Freedom of Expression.

Since his release in April 2015, Meyomesse has been the recipient of the Elsbeth Wolffheim Award from the city of Darmstadt, under the auspices of the German branch of PEN International. In German, he has published "Tagebuch eines afrikanischen Illegalen" ("Diary of an African Illegal") and "Frühling in Deutschland" ("Spring in Germany"). In 2017, texts by Meyomesse were published in the German PEN anthology "Zuflucht in Deutschland. Texte verfolgter Autoren" ("Refuge in Germany: Texts by persecuted authors").

Read more: Day of the Imprisoned Writer  Why persecuted authors need our support

DW: Six years ago, you were imprisoned in Cameroon. What were the charges against you?

Enoh Meyomesse: They said I wanted to make a coup d'etat, that I wanted to take the power with a particular army, that I had weapons in my house, and so on. They came to my house, they looked where I had them hiding. They found nothing. But I was still arrested for those reasons. I spend three years in prison and was released in 2015.

Aside from the accusations, what do you think were the reasons for your imprisonment? Was it for what you wrote, as an author, as a poet or as a historian? Or was it because you wanted to become president?

I think it was both. I was a candidate for the presidential election. I come from the same region as the president of the republic, that was the main problem for my candidature. They cannot allow somebody from the south region to have the ambition to be a candidate. That was the most important reason.

In 2015, the verdict against you was changed and you were found not guilty. How did that happen?

In 2013, I was condemned to seven years. My lawyer appealed that judgement. In the appeal, they discovered that it was not true that I had weapons, and that I didn't conspire to commit a coup d'etat. So they released me. They had no evidence. I had no weapons, no connection with any army, no connection with rebels in the country — there just was no evidence.

That means that the legal system in Cameroon functions, at least partially. 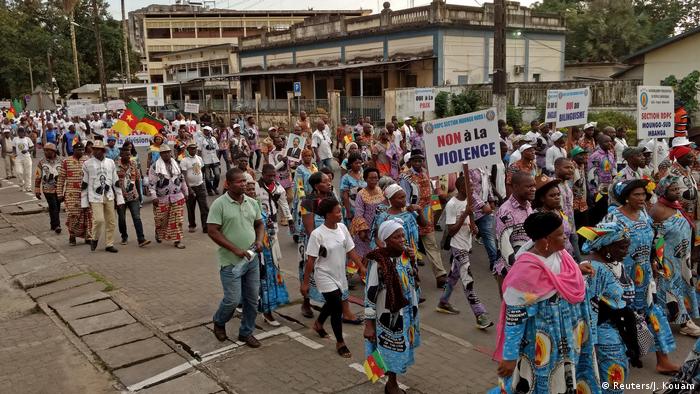 Last month, demonstrators in Northern Cameroon voiced their opposition to independence or more autonomy for the Anglophone regions

How important was the support of other writers while you were in prison?

The support of writers from all over the world through PEN International was fantastic. They sent thousands and thousands of letters to the president, to the prime minister, to the president of the national assembly, to the minister of justice and to the director of the prison. Sometimes, I received 200 postcards in prison. These letters changed my situation. The writers sent me money to live in prison. Every month, they sent me €100 (about $120). If you don't have money in prison, you will die. After my release, they gave me a scholarship to come to here to Germany. That was fantastic.

What is your mother tongue?

My native language is Fang, the language of the people in Southern Cameroon, Gabon, Equatorial Guinea and Congo. But I learned French in School, also English and some Spanish.

You studied in France, you write and communicate in French. Why did you choose to come to Germany?

I didn't choose, they invited me. And I said thank you!

How is your life now?

I have a good life in Germany. They gave me a wonderful apartment. Every month they give me money to live, I travel a lot, I have many invitations. I can buy many books, I write a lot — it is fantastic.

Do you write every day?

Yes, I write every day, if possible. Since I am here I have written more than 10 books. I do write a lot. At present I'm writing a novel. The title of the book is "Les Miserables." I took the title of a book by Victor Hugo, because I see the politicians of my country are "miserables."

How is the situation for writers — or for intellectuals and academics in general — in Cameroon now?

We have many journalists in prison. It is not a good situation. When you are a writer in Cameroon, you are not secure. They can wreck you at any time.

Could you return to Cameroon?

Is your wife with you in Darmstadt?

No. The consulate of Germany in Yaounde refused to give her an entry visa. We tried everything. They totally refused.

How can that be?

Even Monika Grütters, the German culture minister, wrote a letter, She contacted the minister of foreign affairs, and the consulate in Yaounde, but they used many ways to refuse. All the other members of the PEN program, from Bangladesh and so on, they came with their family. But the consulate of Yaounde has refused. That consul, a woman, sometimes in one month gives just one entry visa to Germany. Just one. I have documents, and I don't want to stay in Germany. When my scholarship is finished I will go back or I will go elsewhere. PEN can help me find another country. I told that person everything, but she still refused.

You have been here for two years already. How long will your scholarship run?

While you are here, can you yourself help writers or journalists who are imprisoned in Cameroon?

Yes, sometimes I send them some money to live. I have friends among them. I want to say thank you to the people of Germany because they helped me in prison, they invited me here to Germany, they gave me a good apartment, a laptop, so I have good conditions to write. That is wonderful. I have to say thank you.

Sabine Peschel conducted the interview. DW previously met with Enoh Meyomesse two years ago as part of the special Art of Freedom. Freedom of Art.

Freedom of expression under threat in Europe

On the Day of the Imprisoned Writer, PEN International is warning about developments in Europe. Vice President Sascha Feuchert is particularly worried about Turkey and Hungary. (15.11.2012)

Art of Freedom. Freedom of Art.