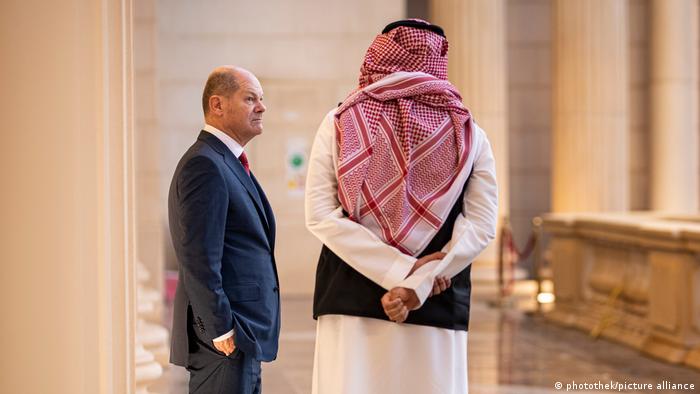 German Chancellor Olaf Scholz heads to the Gulf this weekend

Four years on and the world has changed. Both US President Joe Biden and French President Emmanuel Macron have met with the Saudi leader this year, as rising oil prices and Europe's energy crisis put Western economies on the back foot.

Now it's German Chancellor Olaf Scholz's turn to court MBS. He is due to meet the crown prince in Riyadh on Saturday during a two-day visit to the Gulf. The United Arab Emirates (UAE) and Qatar are the other two stops.

"There is certainly less inclination to raise human rights when dealing with the energy exporters in the Gulf at the moment. Priorities have shifted as a result of the Ukraine war. I don't think that they will be overstressed, let's put it like that."

Rights groups accuse Riyadh of continuing to quash political opposition and media freedom. Amnesty International says Saudi courts still use the death penalty "extensively" and migrant workers are still vulnerable to abuse and exploitation through a system where each person must be sponsored by a Saudi national.

Berlin has said little to preview the Gulf trip. However, long-term deals have reportedly been sealed with Qatar and the UAE to boost liquefied natural gas (LNG) exports to Europe to eventually replace Russian supplies. It's unclear, however, if a similar agreement with the Saudis is even possible.

"Saudi Arabia produces a lot of natural gas, but they need it for their domestic industrialization," Woertz told DW.

The kingdom has the world's eighth-largest proven natural gas reserves after Russia, Iran and Qatar. It is already the world's ninth-largest gas producer but its domestic economy requires huge amounts of gas for electricity generation, water desalination and industrial production.

Saudi Arabia's imports from Germany have declined over the past decade

Riyadh has, however, set a target of doubling gas production by 2030 to enable it to become a gas exporter and could, in theory, provide a vital stop-gap resource to help the EU meet its net zero targets for carbon emissions.

Another possible collaboration with the Saudis could be around green hydrogen, which Germany sees as critical to keep its industrial economy fully powered during the energy transition. Berlin has already signed cooperation deals with Denmark and Canada.

Hydrogen is deemed green when the gas is produced using renewable energies. In Saudi's case, the kingdom has almost endless desert space for huge solar farms, but transportation to Europe could be an issue due to the distance.

"German assistance in terms of technology [around green hydrogen] could be very useful to the Saudis," Woertz told DW.

The ban by Western countries on Russian oil in the wake of Moscow's invasion of Ukraine means Europe is likely to become more reliant on Saudi oil. The EU ban fully takes effect at the beginning of 2023.

"Russia is now selling their oil to India and China at a discount, crowding out Gulf exporters who have predominantly delivered to these markets. And those Gulf countries most likely will deliver more to Europe. So it's a bit of a merry-go-round," Woertz said.

Falling German exports to Saudi Arabia are another reason why human rights concerns may take a back seat. The Kingdom is by far the largest economy in the Middle East and North Africa region (MENA) but was only Germany's 38th largest export market in 2021.

German exports to Saudi almost halved between 2015 and 2021 from €9.9 billion to €5.5 billion and are set to be lower still this year, according to the state trade agency GTAI. While the Gulf region still has an insatiable appetite for German industrial machinery, Europe's largest economy faces stiff competition from China.

German carmakers are also keen to grab a bigger slice of the auto market, as the transition to electromobility gathers pace. The Saudi market is dominated by Japanese and Korean brands Toyota and Hyundai, who have 30% and 20% shares respectively and are also advanced in developing electric vehicles.

German vehicle and part sales to Saudi totaled €1.6 billion in 2015 but had fallen to €0.9 billion by last year, while Chinese firms have doubled their share in the past decade, GTAI wrote recently.

German multinationals could help the kingdom's own ambitious goal to diversify the economy from fossil fuels, which currently account for 42% of gross domestic product. Six years ago, the government announced Vision 2030, whose ambitions include eight mega projects, including a plan to build a net-zero mega tourism and trade zoneon the banks of the Red Sea named Neom.

Scholz will be accompanied by a business delegation for his Gulf trip that could well include representatives from arms manufacturers. German weapons sales to Saudi were negligible last year, having peaked at €1.24 billion in 2012.

Germany banned arms sales to Riyadh in 2018, as part of Berlin's policy of not exporting weapons to active conflict zones. Saudi Arabia is leading an alliance in neighboring Yemen that has been fighting the Iran-backed Houthi rebels alongside the government since late 2014.

With the war possibly close to an end, German arms manufacturers will be keen to restart exports with the world's second-largest arms importer (2017-2021) —  behind only India, according to the SIPRI peace research institute. Germany is the world's fifth largest exporter of weapons.