Energy-recycling stairs for the elderly | Science | In-depth reporting on science and technology | DW | 14.07.2017

Energy-recycling stairs for the elderly

Climb the stairs with a spring in your step - literally! Scientists have created suspension steps that absorb users' energy during descent, to give it back later. They're supposed to make life easier for the elderly. 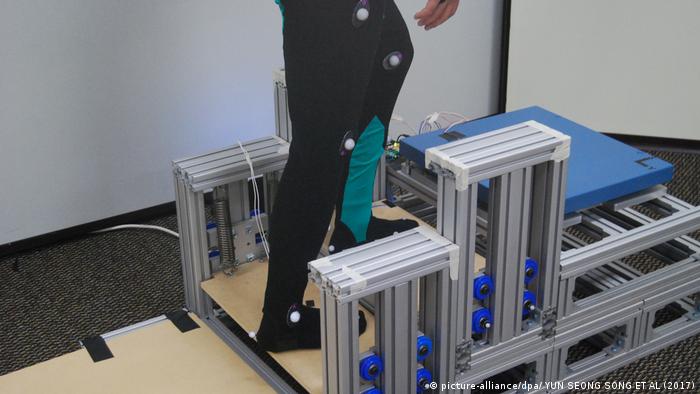 So far, people who have problems climbing the stairs have had to rely on elevators or a stair-lift - but now American researchers have developed a new system.

Yun Seong and his colleagues from the Missouri University of Science and Technology have designed suspension stairs that can buffer energy to re-release it when needed.

This is intended to allow elderly people to climb up or down the stairs with greater ease.

It works like this: latching metal springs attach the steps to an aluminum frame, where they can move up and down.  Every step also has an electromagnetic lock, and a sensor that measures pressure.

If somebody descends the stairs, the steps lower due to the weight. The pressure sensor recognizes this, and sends a signal to the electromagnetic lock - which then makes sure that the stair stays in the lower position.

The energy of the step going down is thus held in the metal springs. If somebody goes up the stairs afterward, the electromagnetic lock releases the step once a foot has touched the next higher step.

With the previously absorbed energy, the motion of pulling up the second leg to the higher step is supported by the metal springs drawing the step up. Recognizing whether a person is going up or down, the steps also help with descent.

In a study published in the scientific journal "PLOS ONE," scientists stated that their step system reduces the amount of energy needed to ascend stairs by 17 percent. Descending stairs would expend 22 percent less energy.

The suspension is also supposed to take pressure off the knees and joints.

"Current solutions for people who need help aren't very affordable. Elevators and stair-lifts are often impractical to install at home," said Karen Liu, one of the study's co-authors.

"Low-cost, easily installed assistive stairs could be a way to allow people to retain their ability to use stairs and not move out of their homes."

With material costs ranging around $50 (44 euros) per step, the scientists say their "energy recycling assistive stairs" (ERAS) can be added to existing stairs, the upper-most step terminating smoothly with the floor.

However, some adjustments are still needed before the ERAS prototype is ready to use. For example, it is not yet possible to adjust the grade of the springs to the weight of different people.

US President Joe Biden has announced new military assistance to Ukraine and said Washington saw "no evidence" that Russia was in control of the strategic port city. Follow DW for the latest.

Until a few years ago, winter mountaineering was the sole domain of the toughest of extreme professional climbers. But now commercial expedition organizers are starting to get in on the act.