Emirates CEO fights for future of giant Airbus A380 | Business| Economy and finance news from a German perspective | DW | 27.04.2015

Emirates CEO fights for future of giant Airbus A380

It has been ten years since the inauguration of the Airbus A380, the world's biggest passenger airliner. Sales have been disappointing, but the giant aircraft still has fans - with Emirates its biggest supporter. 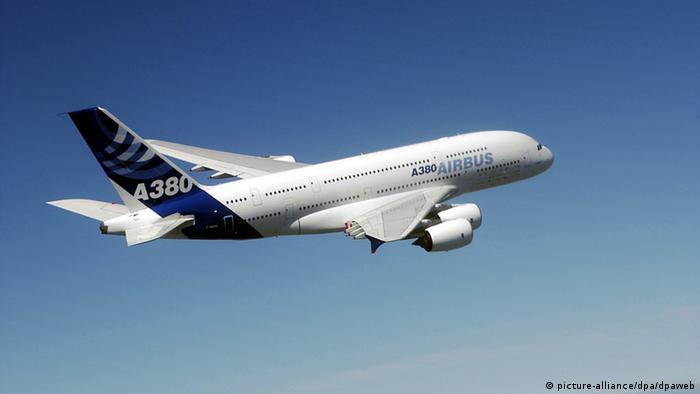 The maiden flight of the Airbus A380 ten years ago today, on 27 April 2005, was meant to usher in a new era of airline efficiency. The huge aircraft with its two passenger decks offering room for up to 853 passengers would replace two or three smaller aircraft on busy routes, so the thinking went, thereby reducing landing-slot congestion and improving fuel efficiency per capita.

Airbus was confident that there was a market for about 1,500 giant passenger aircraft between 2005 and 2025 - and it had only one competitor for the supersized-airliner market niche: Boeing's freshened-up 747-8 Jumbo.

So far, however, Aircraft has had orders for just 318 A380s, and only about 160 of the aircraft have been delivered to clients. Around 20 of the deals currently on the order books are uncertain. Several airlines, including Russia's Transaero, China's Hong Kong Airlines, or the UK-based Virgin Airlines, are openly considering withdrawing their A380 orders.

It's not clear whether Airbus will ever recoup the roughly 20 billion euros in development costs it invested in designing the A380. But for all that, some airlines remain committed supporters of the big jet. 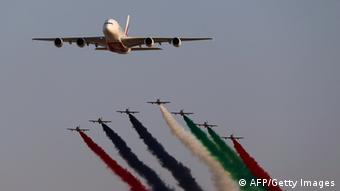 An Emirates A380 struts its stately stuff at the Dubai airshow

It started so well

Things looked so promising on that April morning ten years ago, when the first A380 left the tarmac at Toulouse-Blagnac airport in southwest France. Fifty thousand people were on hand to witness the giant's maiden flight. They thought they were watching the future take wing.

The massive jet, 421 tonnes heavy, lifted off into the mid-morning sunlight with apparent ease. The watching crowd was impressed by the quietness of the engines. Three hours and 54 minutes later, the colossus landed again, to rousing cheers from enthusiastic Airbus workers.

The first commercial flight of the A380 occurred two and a half years later. On 25 October 2007, a Singapore Airlines A380 landed in Sydney, Australia, to headlines in the Sydney Morning Herald proclaiming that "the future has landed in Sydney".

Commercial crosswinds have slowed A380 sales

By now, it's clear that in commercial terms, the A380, in its current form, is proving a bit of a flop. There have been repeated setbacks affecting the A380's order books in strategically important markets.

Among them: India's Kingfisher Airlines went bankrupt, Japan's discount airline Skymark withdrew its orders shortly before delivery of several A380s - Airbus is currently taking it to court - and even solid operators like Lufthansa and Air France have reduced the size of their A380 fleet orders.

Some setbacks and cancellations were due to delays in A380 delivery due to production problems, but these have been overcome. The bigger setbacks have had more to do with economic conditions. The global financial crisis that began in 2007-8 was a heavy blow. Changes in airline passenger travel trends, however, have been the most important factor.

Nowadays, many airlines offer travellers direct nonstop flights in medium-sized aircraft between medium-sized cities. It is often no longer necessary to fly from megacity to megacity, change aircraft, and proceed onward to one's final destination. Airlines have been able to run profitable businesses between smaller cities by buying smaller, more fuel-efficient jets like the Boeing 787 or the Airbus A350.

That's not to say that passengers don't like flying in A380s or Jumbos. Travellers enjoy the roomy cabins. 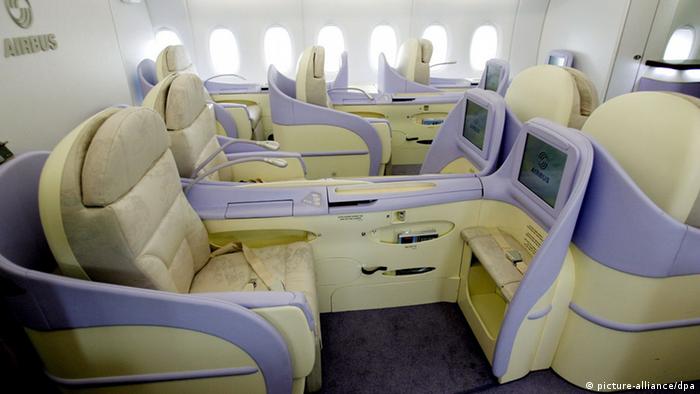 A380s have so far shifted 85 million people between destinations, some of them in first-class luxury.

Emirates, which has bought more A380s than any other airline, has two on-board showers available for first-class passengers on its A380s.

Like Qatar Airways and Etihad, Emirates also features a lounge with a bar. Korean Air even has an on-board duty-free shop.

Even passengers in the economy section of the A380s often find the aircraft a special treat. "About half of the economy passengers still take photos before they enter or exit the aircraft," according to Emirates boss Sir Tim Clark. "The Boeing 747 had a wow-factor phase in the 1970s, but the A380's wow-factor phase seems to be lasting much longer."

The Emirates CEO is a big supporter of the A380, with 140 orders on the books and 60 of the big aircraft already in operation in his fleet. The giant aircraft is perfect for Emirates' business model. Clark was accordingly shocked to learn that Airbus's financial chiefs openly discussed, in December 2014, a possible end to A380 production. 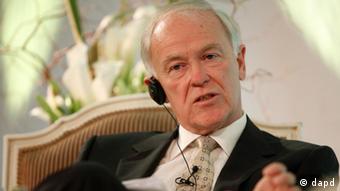 Emirates is promoting a different solution: a redesigned, longer A380-900, something which had always been part of the A380's long-term production plan. Clark also wants the A380 to be fitted with new, more efficient jet engines, noting that most of the technology on which the current version of the A380 is based stems from the 1990s. Emirates is offering to buy 100 more A380s if the improvements Clark favors are made.

A stretch version of the A380 would enable Emirates to transport over 650 passengers in luxurious surroundings. Today's A380s transport between 407 (Korean Air) and 519 (Emirates) passengers. Putting more passengers on a stretched A380-900 would improve the aircraft's profitability.

Clark has said that the A380's operating costs could be shrunk by 13 percent given new, more efficient jet engines. Those are significant numbers in the airline business, which generally has tight margins.

But Airbus CEO Fabrice Brégier is so far reluctant to agree to Clark's proposals. He doesn't yet see sufficient demand to support the estimated three billion euros in additional development costs that would be necessary to generate an improved A380.

Airbus would require orders for around 250 additional A380s to justify investing in a redesigned version of the aircraft, according to Brégier, who has said that he thinks the A380's production had been a planning failure. "The aircraft was introduced probably ten years too early," he recently said.

Sir Tim Clark, by contrast, has expressed optimism about the giant aircraft, and has hinted that there could be significant news coming from Emirates in autumn 2015. Clark never stops trying to drum up enthusiasm for the big birds: "I try to persuade everyone, including my competitors, that the A380 is a great aircraft."

Airbus has posted a record year and logged more new orders than Boeing but its banner year was pipped by its US rival when it came to actual deliveries of jets. Boeing's orders were worth more than the Europeans' too. (13.01.2015)

European airplane maker Airbus has clinched a $8.3 billion deal to produce its A380 model for a leading aircraft leasing group. The superjumbo aircraft is the world's largest passenger plane. (12.02.2014)

European aviation giant Airbus has confirmed that a deal to deliver A380 superjumbos to its Japanese client Skymark Airlines has been cancelled. The Asian airline cited financial trouble as the reason for backing out. (29.07.2014)