Egypt′s universities: The last bastion of the opposition? | Middle East| News and analysis of events in the Arab world | DW | 03.11.2014

Egypt's universities: The last bastion of the opposition?

Opposition figures and activists in Egypt are being harassed, but the government has so far been unable to get political protests and riots at the country's universities under control. 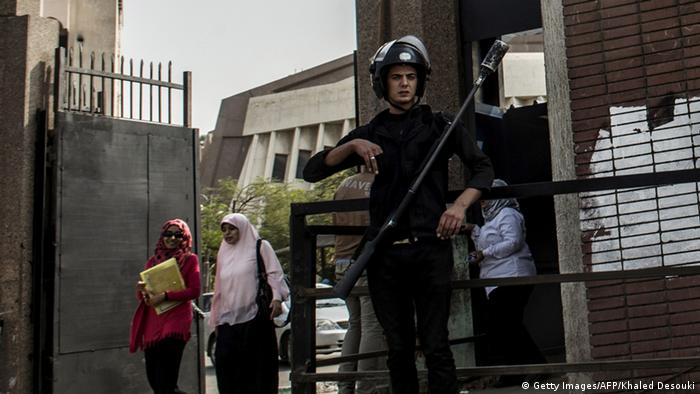 Since the fall of former President Mohammed Morsi in July 2013, Egypt's government and military have tightened the reins: Morsi's Muslim Brotherhood are now seen as terrorists, tracked and hit with draconian penalties, the secular youth organization "April 6 Movement" has been banned and state control over human rights activists and journalists has sharply increased.

But at the universities, regular political protests have not given in to the regime crackdown despite increased security measures. The protests have even spread beyond the campuses. Last Tuesday, dozens of students from the renowned Sunni Al-Azhar University in Cairo blocked several roads and motorway exits and shot off rockets before police shut down the protests with tear gas.

Less than a week earlier, a bomb went off at the Cairo University, injuring 11 people. And in Alexandria, a student recently died after being shot by security forces. 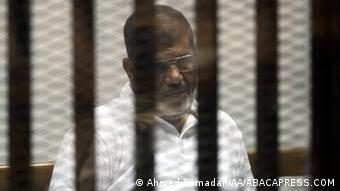 Morsi was ousted by the military in July 2013

'As if we were potential terrorists'

In recent months, the universities have been heavily fortified against any form of political protest and violence. Steel doors, metal detectors and surveillance cameras now dominate, and guard dogs patrol campuses. Students must submit to extensive security checks before being allowed into lecture halls.

"When I come to the university, I now feel like I'm walking into a war zone," said a philosophy student at Cairo University, speaking with DW's Arab service. "These are very thorough searches. They look at us as if we were potential terrorists!" Fearing political persecution, he wished to remain anonymous.

A group of 23 activists in Egypt has been sentenced to three years imprisonment after they were found guilty of holding an unauthorized protest. Opponents have criticized the current law as stifling political dissent. (26.10.2014)

An Egyptian court has ordered the release of activist and blogger Alaa Abdel-Fattah. The prominent activist was sentenced to 15 years imprisonment after violating Egypt's anti-protest law. (15.09.2014)

Authorities are trying to get a handle on the university protests with a massive array of government security forces and private security firms. And soon, the government intends to take an even harder line against Egypt's 1.5 million students: As Sayed Abdel Khalek, the minister for higher education, recently introduced a new law facilitating the prosecution of civilians before military courts, he explained that it would explicitly serve to "protect the universities."

In addition to students, quite a few university staff members are also displeased by the increased political control. Laila Soueif, a professor at Cairo University, called it an "attack on the independence of universities" and an "unprecedented obsession with control." According to her, the state is even monitoring the choice of faculty deans.

Hazem Hosny, a political science professor at Cairo University, points out that "young people are concentrated at universities, and therefore the voice of the young opposition is heard more clearly here than elsewhere."

"But I believe that at present a new opposition is being formed, even if it has perhaps not yet fully crystallized," he added. "This opposition stands mostly outside the traditional parties, and is made up of educated and avant-garde young people who understand what is happening around them." 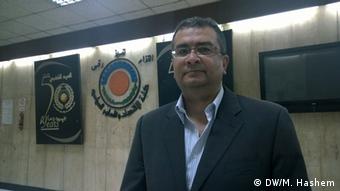 His colleague Iman ​​Abdel Wahab, also an economics professor, sees things differently. He thinks that the universities are "becoming the last bastion for opposition groups" - and that's not a good thing, he added.

"What happens here is an exploitation of certain social classes, of young people often with a rural background. This is a targeted campaign to attract students, by the Muslim Brotherhood and other political groups," he said. "Universities are becoming an arena for political struggle, and are losing sight of their original purpose."

Most of the student demonstrators belong to organizations that are ideologically similar to the Muslim Brotherhood. But left-leaning and liberal student groups have also participated in protests, sometimes leading to ideological battles.

Emad Abdel Hamid, a student representative of the left-wing secular "April 6 Movement," said Morsi supporters are only interested in reestablishing the regime of the Muslim Brotherhood. "They are provoking confrontation with the security forces for their own purposes," he criticized.

Mahmoud al-Azhari, a student protest leader, denied the accusation. "We have repeatedly reached out to the other student movements, with an offer to unite under one cause," he said. According to him, the students must "lead the Egyptian people to free themselves from the military regime."

Gambia gets ready to swap marbles for ballot papers