In the wake of political turmoil in Egypt, questions linger about the damage inflicted upon its archaeological treasures. But how much the international community can or should do remains unclear. 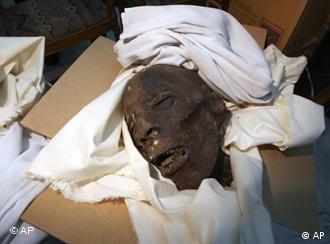 Precious artifacts in the Egyptian Museum were damaged in the protests

While Nefertiti sits with her head held high on Berlin's Museum Island, archaeologists are besieged with worry over the cultural riches in her home country. Graves have been plundered; artifacts were found smashed in the corners of a famous museum; and protestors have demanded the resignation of Egypt's antiquities minister, Zahi Hawass, known for his aggressive pursuit of Egyptian artifacts being kept abroad.

Hawass has also been under scrutiny abroad for his inconsistent reports about a break-in at the Egyptian Museum in late January. While he initially announced that 70 objects had been broken by looters, he later revealed that 18 or, according to some accounts, 19 artifacts were missing, including highly valuable objects such as a gilded wooden statue of Tutankhamen and a limestone statue of the god Akhenaton, which Hawass later reported was found in a trash bin. Tutankhamen has yet to surface.

Extent of the loss is unknown

The Egyptian Museum reopened earlier this month, but challenges lie ahead as experts investigate the extent of vandalism throughout the country. Gabriele Pieke, Egyptologist and general secretary of the International Committee of Egyptian Museums, says that in addition to the Egyptian Museum in Cairo, smaller museums, tombs and archaeological sites have been robbed of significant artifacts.

What is more, it may take years to understand and address the full scope of the robberies, as many sites lack thorough documentation.

"It will be a challenge to draft concrete lists of exactly which originals were stolen," she said. "And some will simply have to be accepted as lost."

Although the International Council of Museums (ICOM) has attempted to compile legally-binding red lists of stolen artifacts, local authorities have been reluctant to collaborate with international organizations, she explained. UNESCO also made an appeal this month for tight scrutiny of the art market in order to prevent the sale of stolen goods, calling on security forces, customs agents, art dealers, and collectors to remain vigilant.

Pieke foresees that the next few months in Egypt could be very unsteady as people try to profit from valuable objects on insider black markets. "The know-how of international organizations will not be able to implement itself until the political situation stabilizes," she said. 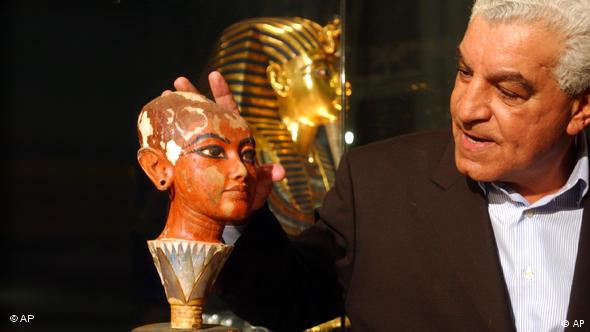 Zahi Hawass, seen here with an ancient statue of King Tutankhamun, is in charge of Egypt's cultural artifacts

Should the international community interfere?

Long-term plans could include helping museums in Egypt to establish security and conservational measures according to western standards, although such efforts have been made in recent years.

Yet Egyptologists are not unanimous about the degree to which international organizations should get involved. Sylvia Schoske, director of the Egyptian Museum in Munich, believes that the importance of tourism to Egyptians and an overriding sense of national pride in their cultural heritage would never allow the situation to get out of hand. She maintains that, rather than interfering in Egypt's affairs, the international community should trust the people to take care of the situation themselves.

"It's not as if the Egyptians are sitting in the desert and relying on methods from the 19th century," she said. "Many of our colleagues there were trained abroad and have the necessary resources. Unless they come to us and ask for help, it is a renewed form of colonialism that has no place in our age."

Nevertheless, political unrest and reports of vandalism may further weaken Hawass' stance regarding Egyptian artifacts abroad. His main targets have been the famous Rosetta stone at the British museum and a 3,300-year old limestone bust of Nefertiti at the New Museum in Berlin, which Hawass claims was brought to Germany under false pretenses in 1913.

On January 2, Hawass renewed his demand for the bust's return in a letter to the Prussian Cultural Heritage Foundation, yet his request lacked an official signature from the Mubarak administration. The foundation's president, Hermann Parzinger, gave an official response later that month that he had no intention to return Nefertiti. 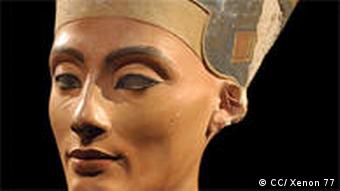 Nefertiti isn't likely to be returned to Egypt any time soon

"She is and remains the best Egyptian diplomat in Berlin," he said. "The museums of the Prussian Cultural Heritage Foundation have a vested interest in harmonious cooperation with Egyptologists and are currently drafting new ideas for teamwork," adding that he would lay out his suggestions for further collaboration in a written response to Hawass. A spokesperson for Parzinger explained that the situation remained unchanged since this statement.

While experts agree that the best way of moving forward is to work closely in tandem with authorities and experts in Egypt, suspicion and fickle behavior on both sides may hinder transparent communication and a collective effort to ensure the future of Egypt's archaeological treasures.

"Egyptologists everywhere once lay at Hawass' feet," said Schoske. "Now they are attacking him with just as much verve after the western media cast him in a negative light."

Schoske explained that although much recent criticism of Hawass has been warranted, he has implemented several positive changes on behalf of his country, such as limiting access to archaeological sites to trained professionals and demanding that scientific reports be written in the native language.

"Egypt has proven itself to be a proactive society," she said. "And the best protection of the artifacts requires involvement of the locals. So we should to deal with them eye-to-eye."

There's a general consensus among policymakers and analysts that the uprisings in Egypt and elsewhere were unpredictable. That's untrue. There were plenty of experts who warned concretely about an impending crisis. (21.02.2011)

An international team of scientists has solved one of history's great whodunits, using molecular biology to discover what killed the "boy king" Tutankhamun. (17.02.2010)