The ongoing spat between Germany and Egypt over the ancient bust of Queen Nefertiti has taken a step forward, with Egypt sending an official request for its return to German authorities. 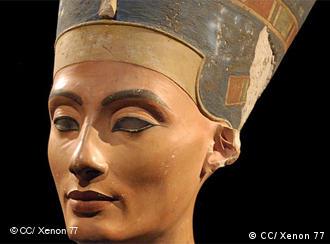 The bust was discovered by a German archeologist in 1912

The Egyptian government on Monday said it has sent an official petition to German authorities asking for the return of the 3,300-year-old limestone bust of the ancient Queen Nefertiti.

The Nefertiti bust was uncovered at the ancient site of Amarna by the German archeologist Ludwig Borchardt in 1912. Egypt claims Borchardt took the bust to Germany using fraudulent documentation.

Germany has denied previous requests from Egypt to return the bust, saying Germany obtained it legally and that the artifact is too fragile to transport.

The Supreme Council of Antiquities is a branch of the Egyptian Ministry of Culture which works "to protect and promote the cultural heritage of Egypt."

In 2002, the council created a special department to recover artifacts it says were taken from the country, mostly during and in the wake of English colonial rule. Nefertiti's bust dates back to the 14th century B.C. and is one of the highest-profile artifacts sought by Egypt.

In Berlin, art turns up in strange places

From old Nazi bunkers to train stations, art can be found nearly everywhere in Berlin - even in museums. DW's Anne Thomas discovered art in the most unlikely places and found some striking juxtapositions. (12.11.2010)

As Egypt and Germany squabble over a 3,500-year-old bust of Queen Nefertiti in a Berlin museum, Egypt's antiquities chief told Deutsche Welle the treasure was taken unethically and Cairo would push for its return. (22.12.2009)