After suffering heavy damage in World War II, the Neues Museum in Berlin was left as a ruin for over 60 years. Now it is being reopened and sports a modern look. However, some do not approve of the updated version. 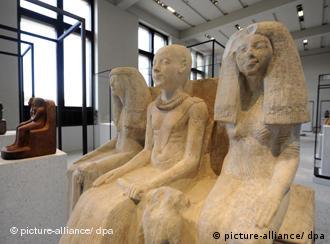 The Neues Museum (New Museum) is celebrating its official re-opening, boasting exhibits like the famous bust of Nefertiti and other Egyptian artefacts. Following decades of post-war ruin, its restoration was planned and carried out by prominent London architect David Chipperfield and his advisor Julian Harap, who have recreated it as a mixture of old and modern.

However, many people in Berlin would have preferred it if the museum had gone back to the way it originally looked when it opened on the city's Museum Island in the mid-19th century. These conflicting views have led to a fierce cultural battle that shows no sign of easing, even though the museum renovation has already been completed.

Coming back to life 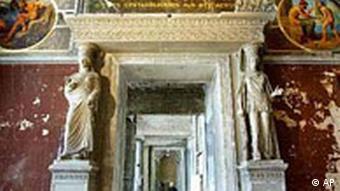 The war inflicted heavy damage on the building

After being heavily bombed in 1945, the Neues Museum was left to decay. It wasn't until 1986 that the communist East German government began construction work, with the goal of creating a perfect copy of the original design.

In 1990, after the fall of the Berlin Wall and German reunification, restoration work was halted and the concept for the museum's redesign was turned into a competition. Numerous renowned architects put forward their ideas, but the Prussian Cultural Heritage Foundation and the Berlin Senate were not entirely satisfied with any of the propositions.

A so-called "closed competition" followed, with only a handful of architectural firms contacted for their expert opinion. Among these experts was David Chipperfield from London, who was officially appointed to take over the project in 1997.

Chipperfield had already gained a reputation in Germany for his design of the Museum of Modern Literature in Marbach and the Riverside Hotel in Hamburg. The former president of the Prussian Cultural Heritage Foundation, Klaus Dieter Lehmann, sees Chipperfield's Neues Museum design as a perfect blend of old and new.

"I find it spectacular," said Lehmann. "What was done here incorporates old aspects, but shows them in a contemporary form."

Too much change for some

All this was a slap in the face for traditionalists, who organized a petition in 2007 entitled "Save the Museum Island." But their efforts failed, as they could only gather 6,000 of the 20,000 necessary signatures. The conflict then became more severe when members of the Society of Ancient Berlin accused Chipperfield of wanting to destroy the Museum Island for the second time. They saw his architectural concept as a form of cultural destruction, likening it to the 1945 bombing of the Island. 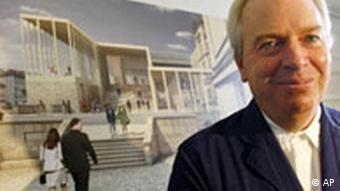 Chipperfield thinks that architecture should tell a story

Chipperfield, however, has taken all this criticism in his stride. For him, architecture is a method of storytelling, and making new versions of something that once existed is against his principles. Instead, he says he wants to give history a chance to express itself by showing the traces of World War II within a new, modern context

"This is a complete reconstruction, and we took the original building very much into account," said Chipperfield. "It was important for us to not destroy any of the remaining original fragments."

The Society of Ancient Berlin does not share this opinion and plans to continue its campaign. It has written to the German Committee of Petitions, and in December 2008 it asked UNESCO to put the Museum Island on the list of World Heritage sites that are at risk of losing their title.

The group is also against the construction of a new central reception building on the Museum Island, which was also designed by Chipperfield. According to Gerhard Hoya from the Society of Ancient Berlin, Chipperfield "doesn't have the sensitivity that he claims to have."

For the architect, it is important that the new version of the Neues Museum does not gloss over the blows it suffered in World War II, while still showing aspects of its former beauty. But it seems that this concept will never please the traditionalists.

Cologne's past rises from the rubble

Half a year after the dramatic collapse of its city archive building, Cologne's documents are to be given a new home. The city council has been in hot water lately after several important building projects fell through. (11.09.2009)

After years of controversy, debate over Berlin's Spreeinsel continues. The architect chosen to rebuild the palace that once stood on the site is under fire and plans for the interior are anything but laid in stone. (08.07.2009)

After 11 years of renovation to repair damage from World War II, Berlin's Neues Museum was unveiled Thursday, March 5. It will open to the public in October. (05.03.2009)