Tens of thousands of Egyptians gathered on Tahrir Square in Cairo to protest the ruling military council's power grab - and the delay in publishing the results of Sunday's presidential election. 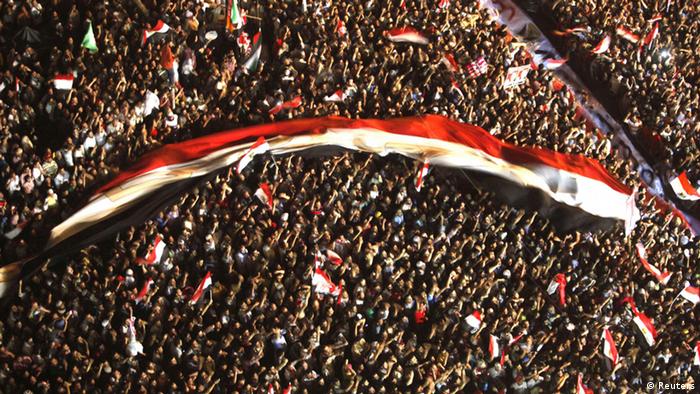 Members and supporters of the Islamist Muslim Brotherhood, joined by several secular movements, gathered in the square for the protest throughout Saturday and into Sunday morning.

Egyptians are still waiting for the results of Sunday's runoff election.

The Muslim Brotherhood insists that its candidate, Mohamed Morsi, has won the election, a claim that has been rejected by his opponent, Ahmed Shafiq, a premier under former President Hosni Mubarak.

The race has polarized the country between those who want to keep religion out of politics and fear the Brotherhood would stifle personal freedoms, and others who fear a return to the old regime under Shafiq's leadership.

The delay in the publication of results, which had been announced for Thursday, has raised suspicion in Egypt that the result was being negotiated rather than counted.

The ruling military council, which had promised to hand over power to civilians by July 1, dissolved the parliament on the eve of the election and then issued a decree as polls closed on Sunday, setting strict limits on the powers of whoever would be elected president.

The ruling Supreme Council of the Armed Forces assumed legislative powers after a court ordered the Islamist-led parliament dissolved and issued decrees giving the army powers of arrest and a broad say in government policy, curbing the powers of the president.

Protesters have been in Tahrir Square since the constitutional document was issued on Sunday.

They were chanting "down with military rule” and called on the military to reverse the constitutional declaration that gave it sweeping powers.