Egyptian football: Dreaming of getting back to normal 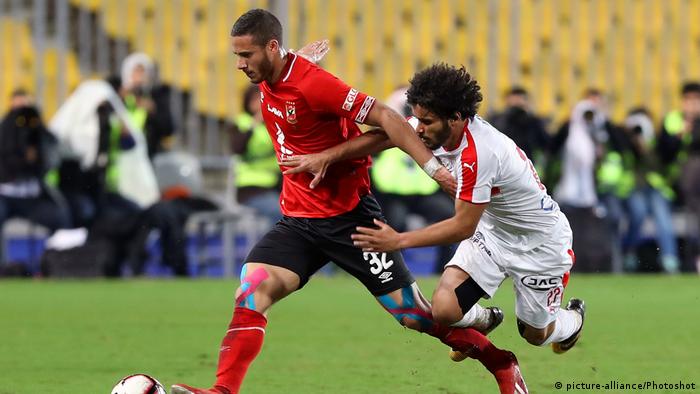 Only around 30 fans showed up for the Cairo derby between Al Ahly and Zamalek at the military-owned Borg el Arab Stadium in March.

The match had been moved from the Egyptian capital to a neutral venue for security reasons. Under normal circumstances, this arena, with a capacity of 86,000 would be far too small for the throngs of fans of both clubs. Al Ahly alone have an estimated 25 million fans, while Zamalek are thought to have around 10 million. Al Ahly is regarded as a working-class club, while Zamalek are seen as representing the elite.

Almost no supporters allowed in the stadiums

However, in March, just 15 supporters of each team were allowed to attend the match between the two top teams in the table. It ended in a scoreless draw – fitting, given the atmosphere in the all-but-empty stadium. This is typical of Egyptian football today; almost no supporters in the stadium, with millions watching games live on television.

"Of course this is not a satisfactory situation for us," said Mahmoud Moussa, a 28-year-old Al Ahly supporter who would love to take in a game live in the stadium again – but this is not possible at the moment. 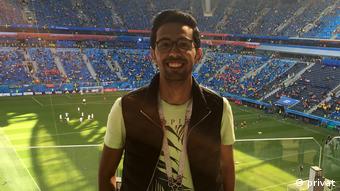 "We can only watch our team on TV. Or we can attend African Champions League matches," Moussa said. "Fans are allowed there."

This is how things have been ever since the tragedy at Port Said more than seven years ago, when, on 1 February 2012, local club Al Masry faced visiting Al Ahly. Seventy-two people were killed and hundreds of others injured in rioting that broke out after the final whistle. However, the word riot is something of a misnomer. It would be far more accurate to describe it as a massacre of Al Ahly supporters, carried out reportedly with the tacit support of the police. Al Masry supporters armed with stones, sticks and machetes stormed the away team's block of supporters, who never stood a chance, as there was no way out – the lights in the stadium had been switched off and the exits were locked, some blamed the police. 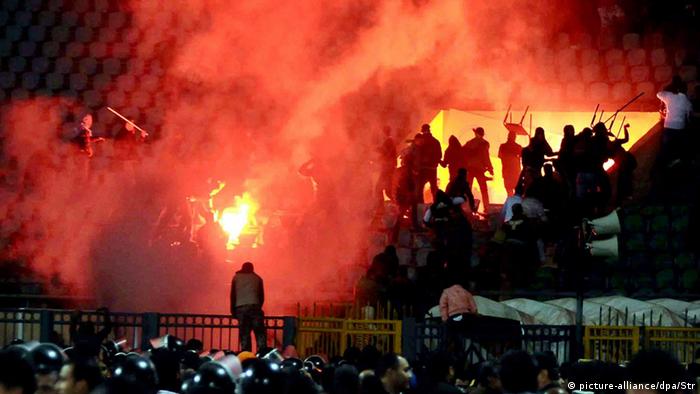 In a trial three years later, 21 Al Masry supporters were sentenced to death. However, the executions have not been carried out. They probably weren't the real culprits anyway, they are more likely to be found in Egyptian politics and in the country's police apparatus.

Clearing the path – to Tahrir Square

The attack on the Al Ahly fans is seen as a measure of revenge by the government appartus. In the weeks leading up to that match, the Al Ahlawys, as Al Ahly's ultras are known, had supported the general population in the increasingly violent uprising against the regime of long-time Egyptian President Hosni Mubarak. During those decisive days of the Arab Spring, bridges and streets leading to Cairo's Tahrir Square had been sealed off. The football supporters, battle hardened from a history of fighting the police, pushed through to the front of the demonstrators and literally cleared a path to the square. Most experts on the Arab Spring in Egypt agree that without the Al Ahly fans, Mubarak would not have been brought down when he was.

More than seven years on, Egyptian football still hasn't got back on its feet. When the authorities tried to let large numbers of supporters back into the stadium for a Zamalek game in 2015, more than twice as many fans showed up than the 10,000 they had planned for – and the evening ended in another catastrophe. Rioting broke out at the entrances and 22 people lost their lives as a result.

German coach Rainer Zobel, who has coached a number of teams in Africa and the Arab world – including Al Ahly – has witnessed the fall of Egyptian football first hand. 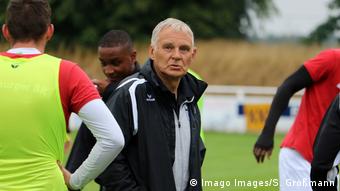 "Of course, the whole thing has done Egyptian football enormous damage," said the now-70-year-old, who coached Egyptian side El Gouna between 2013 and 2015. "League play was suspended for months and interrupted repeatedly after it resumed. The quality of the previously strong Egyptian league has suffered greatly, and the national team is no longer a dominant force on the continent."

Last autumn, the authorities again lifted the ban – if ever so timidly. They allowed 5,000 supporters to purchase tickets for the match between Zamalek and another Cairo club, ENPPI. Tickets could only be purchased in advance and under strict conditions, but those who did manage to get in cheered enthusiastically throughout the match, singing things like: "Today we are here and we're taking back the league."

For Egypt's politicians, dealing with football supporters is perhaps one of the most important and sensitive issues in shaping the country's future. There is no other organization or institution that can come close to having as high an impact – including economically –as  Al Ahly's community of fans.

On the one hand, the authorities regard the ultras as terrorist groups, but they also known that the need the fans onside if they are to provide a much-needed boost to the economy.  This is one of the reasons why fans are again being allowed to attend Egyptian national team matches – and there will be no obvious restrictions of Africa Cup of Nations matches. However, security will be tight, with the army, secret service and the police watching the supporters' every movement.

As for the home side, Rainer Zobel fears that the tournament could end early for Egypt.

"The best players, like Mo Salah, now play abroad, but the roster is no longer as deep as it used to be," he said. "This will have an impact."

Gerald Asamoah on Africa Cup of Nations: 'When games are on, the streets empty'

Born in Ghana, Gerald Asamoah came to Germany as a child and went on to play in the Bundesliga and for Germany. Asamoah spoke to DW about the Africa Cup of Nations and why African players are in such high demand. (20.06.2019)

The national team are ready for the Women's World Cup but footballers in Nigeria still face a battle for recognition, both financially and at home. New sponsorships and changes to the domestic league offer hope. (07.06.2019)