A retrial for Egypt’s former president, Hosni Mubarak, has been adjourned to June 8. He faces charges over the killing of protesters in the uprising that toppled him from power and, with his sons, corruption allegations 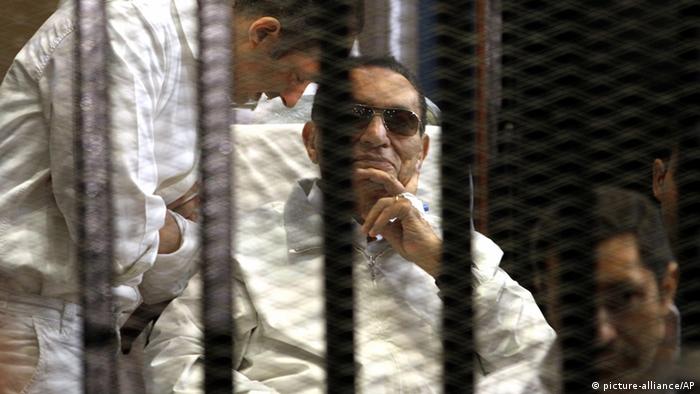 The hearing began on Saturday surrounded by tight security, with some 3,000 officers deployed around a makeshift courtroom at a police academy on the outskirts of Cairo.

The 85-year-old former President Hosni Mubarak, who was airlifted to the trial, was taken into the courtroom in a wheelchair, dressed in white and wearing sunglasses.

Mubarak is charged with complicity in the murder of hundreds of protesters in the February 2011 uprising that saw him deposed. His then-iInterior minister, Habib el-Adly, and six security chiefs are also standing trial.

They were both convicted and given life sentences in June last year for failing to stop the killings, but, after their appeal was accepted by Egypt’s highest court in January, a retrial was ordered.

The former president is also being retried on corruption charges, along with his sons, Gamal and Alaa.

After Hosni Mubarak was toppled power, Egypt seemed to be en-route to a new era. But the country is now more divided than ever, and democracy still a distant dream. What went wrong? (07.05.2013)

Chief Judge Mahmoud al-Rashidi has taken over the trial, almost a month after a presiding judge withdrew, causing the case to be postponed.

All defendants pleaded not guilty to the various charges, with state television broadcasting live footage of hearing. Prosecutors told the judge that new evidence from a fact-finding committee's report would be presented.

Crowds, including pro-Mubarak groups, gathered outside the court building, although there were far fewer people present than at the previous trial.

Mubarak is currently being held confined in hospital at Tora prison in southern Cairo, having been sent back there from a military infirmary where he stayed until April. The ex-leader’s health reportedly deteriorated after he suffered a fall in December.

An independent commission last year found that at least 846 people were killed and more than 6,000 wounded in the "Arab Spring" revolt against Mubarak.

Egypt remains polarized by the legacy of the former leader who ruled the country for almost 30 years. The country has endured two years of political and economic turmoil since the popular revolt, with a steep drop in foreign investment and a severe currency crisis.