Unrest in Egypt, missile treaties and terrorism have dominated the discussion between the gathered heads of state and diplomats during a weekend-long security summit in southern Germany. 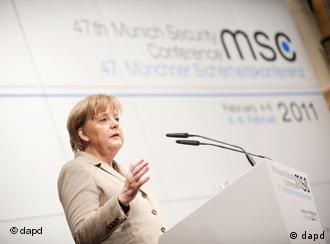 In her speech at the 47th Munich Security Conference on Saturday, German Chancellor Angela Merkel said Egypt's pro-democracy demonstrators are "right" but that political change in the country must be free of conflict.

"There will be a change in Egypt ... but it needs to be change in such a way that it is peaceful and orderly," she told the conference.

Drawing parallels between the demonstrations that helped lead to the fall of the former East Germany and the ongoing protesters in Egypt, Merkel said Egyptian protesters deserved the support of outsiders.

"There are, once again, pictures of people who believe in themselves," she said. "Who are we if we are not siding with these people?" She added, though, that the West can't simply export its model of democracy to other regions. 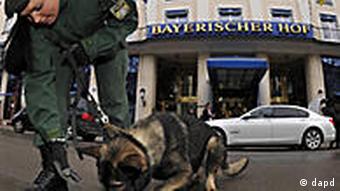 The chancellor was also optimistic that technological change and the enforcement of global Internet access will make an important contribution to the implementation of key Western values.

"Nothing can be hidden anymore. Everything has a face," Merkel said. "I am optimistic that our model that respects the dignity of each individual ... still is the best to fight against terrorism and attacks against freedom."

The road to democracy

US Secretary of State Hillary Rodham Clinton's comments to the conference, which ends on Sunday, did not go into specifics on Egypt, but she spoke about the pitfalls of establishing a nascent democracy.

Revolutions have overthrown dictators in the name of democracy only to be replaced by new authoritarian governments, Clinton said, adding that "transition to democracy will only work if it's inclusive and transparent."

Countries with authoritarian regimes will be hard pressed to keep their populations happy, Clinton said.

"In today's world, where people are communicating every second of every day, it is unbelievable" to assume they will not demand greater freedom and opportunity, she told the assembled leaders and diplomats.

Clinton and Russian Foreign Minster Sergei Lavrov both spoke at the conference about plans for mutually reinforcing missile defense treaties.

'The economy is our fate'

European Council President Herman van Rompuy repeated the stance of the EU by saying, "We stand behind the Egyptian people."

"Events in Tunisia and Egypt show that stability can result in immobility," Rompuy said. "Therefore stability alone cannot be the ultimate answer. There is a difference between stability and sustainability" 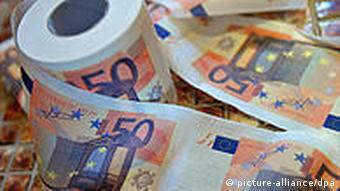 The euro is a source of global stability, says van Rompuy

Rompuy went on to speak about the security and stability of the EU, a stability he said, which is largely based on the strength of the euro as a currency, and based on the fact that the EU still has candidate nations eager to join.

"As long as a club has candidate members it is on the right track," he said, "We are still sexy as the European Union."

British Prime Minister David Cameron said efforts to prevent Islamic extremism have failed in the UK largely because of willingness to segregate.

Saying that the roots of extremism are not in poverty or oppressive governments, Cameron insisted that stronger efforts to be more inclusive must be made.

He argued that Europe has been too tolerant for too long of organizations that do not share the Western ideals of democracy and equal rights.

"The ideology of extremism is the problem," he said. "Islam, emphatically, is not."

This year's Munich Security Conference has opened up with world leaders reacting to the unrest in Egypt and North Africa. Critics question, however, whether the Munich conference is the right venue for such crisis talks. (04.02.2011)