Egyptian officials have confirmed that Mohammed Mursi and Ahmed Shafiq will advance to a second round presidential runoff in June. But several other prominent candidates dispute the results of the first round. 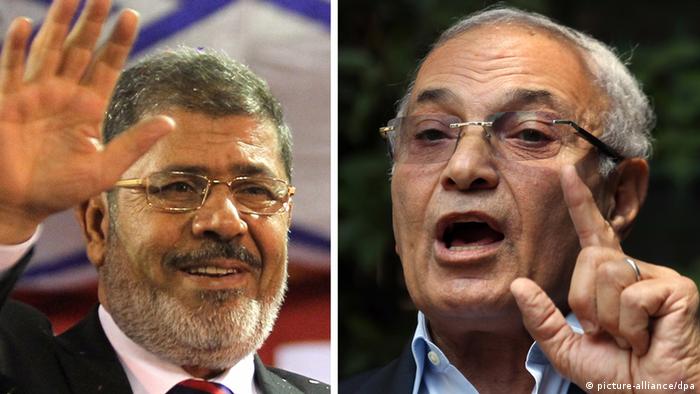 Egypt's electoral commission confirmed on Monday that the Muslim Brotherhood will face off against Hosni Mubarak's final prime minister in the second round of the presidential election scheduled for June 16-17.

Electoral commission chief Farouq Sultan told a televised news conference in Cairo that no candidate managed to receive a majority during the two days of voting on May 23-24. As a consequence, the top polling Muslim Brotherhood candidate Mohammed Mursi and former Mubarak-era prime minister Ahmed Shafiq will advance to a runoff vote.

"No candidate won an outright majority, so according to Article 40 of the presidential election law, there will be a runoff between Mursi and Shafiq," Sultan said. Mursi won 24.3 percent of the votes, slightly ahead of Shafiq's 23.3 percent.

An Islamist and a former member of the Mubarak regime placed well in the first round of presidential elections in Egypt. The result has split the country into two camps, writes DW's Rainer Sollich. (26.05.2012)

Egypt's first competitive presidential election drew a 46 percent turnout among the country's 50 million eligible voters, according to the electoral commission.

The Muslim Brotherhood has tried to rally the supporters of the other 11 candidates who ran in the presidential election, painting Shafiq as a threat to the revolution that ousted Hosni Mubarak. Shafiq's brief tenure as prime minister came to an end when Mubarak was forced to resign on February 11, 2011 amid an unprecedented 18-day popular uprising.

Like Mubarak, Shafiq also served as commander of the Egyptian air force from 1991-2002. But he has sought to distance himself from the defunct Mubarak regime, recently stating that Egypt has entered a new era and there would be no return to the past.

Shafiq will likely seek the support of more secular Egyptians who fear that the Muslim Brotherhood will implement some form of Islamic law if it wins the presidential election. The Brotherhood already controls around 50 percent of the seats in Egypt's parliament.

As the two official winners now seek to court the opposition, several of the more prominent losing candidates have challenged the legitimacy of the results altogether.

Abdel Moneim Abol Fotouh, an independent Islamist who was once a member of the Muslim Brotherhood, alleged that "millions of pounds were stolen and distributed to people to buy vote." He also claimed that representatives of candidates had been refused access to polling stations during the vote counting. 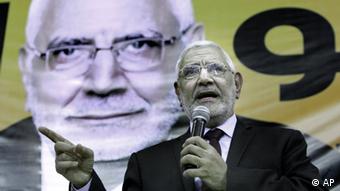 Independent Islamist Fotouh has outright rejected the first round results

"I reject these results and do not recognize them," Fotouh told a news conference prior to the electoral commission's announcement. The commission put Fotouh at fourth place with 17.2 percent of the vote.

"The national conscience does not allow for labeling these elections honest," he added.

Leftist candidate Hamdeen Sabahi had called on Sunday for a recount, claiming that he had been cheated of coming second place due to electoral violations. Sabahi came in third with 20.7 percent of the vote, according to the official tally.

Amr Moussa, the former head of the Arab League and a foreign minister under Mubarak, also raised questions about the first round result, claiming violations had occurred.

"There are question marks on the result of the election," Moussa, who won 10.9 percent, told a news conference prior to the commission's announcement. "There were violations, but this should not change our minds on democracy and the necessity of choosing our president."

Thousands of people marched in London and other towns and cities against a huge rise in energy prices. Prime Minister Liz Truss faces a crisis of public confidence less than a month after she took office.