Being the world's tallest leader, a passionate painter and former basketball player, Albania's Prime Minister Edi Rama makes for quite the unconventional character.

Albania's population of three million is one of Europe's poorest, yet Edi Rama never gets tired of trying to convince Brussels - and Tim Sebastian - that the EU needs his country.

Back in the 90s, the artist Rama was exhibited in New York City, France and Berlin. In 2009, he published a book compiling selected notes and paintings called "Edi Rama". Although he now spends more time in politics, he still finds time to do some drawing in his office every day, during meetings, as he told Tim Sebastian after the lights went off.

He served as Minister of Culture, Youth and Sports from 1998 to 2000, and then went on to become Mayor of Tirana until 2011. Since 2005, Rama has been the head of the Socialist Party of Albania. In 2013, he became Prime Minister after his coalition of left-wing parties won the parliamentary elections.

Tackling crime and corruption in Albania

With organized crime and drug trafficking rampant, Rama vowed to take on the mafia, to fight corruption and to impose the rule of law. But Albania is still ranked a lowly 110th of 176 countries in the Corruption Perceptions Index, up six places on 2013. Critics say corruption is still endemic but Rama maintains that progress should be rewarded by the EU. 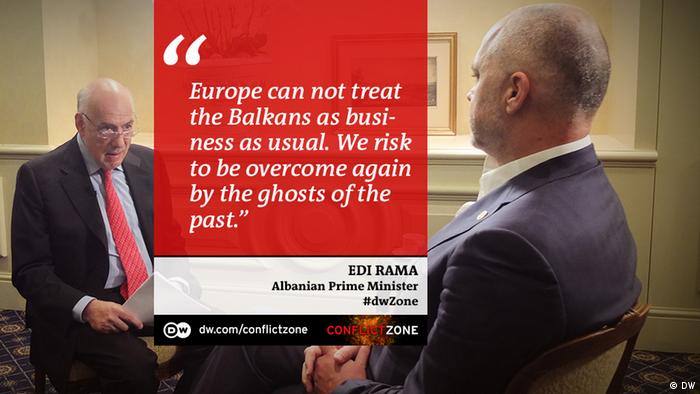 Albania applied for EU membership in 2009 and was finally granted an official candidate status in June 2014. Rama says Albanians are growing impatient about being made to wait and that tensions with neighbors may spill over if Balkan countries are not united within the EU.

Ghosts of the past?

"It's not a threat. It's a very simple truth. Because in the Balkans, we came out of a long history of bloodshed, wars, conflicts and so on. So the ghost is the past around or our generation will make it in the right way and will all unify with Europe and it will be over or the ghost of the past will take over. It's very simple," Rama says on Conflict Zone.

Is he gratuitously turning up the temperature to put the EU under pressure? You can be the judge of that. Watch the full show on September 23.

Crime, good governance and the EU's expectations. A sometimes heated exchange between Tim Sebastian and Edi Rama. Here's some background on the challenges Rama faces as he prepares to take Albania into the EU. (21.09.2015)

Tim's guest this week was the Albanian Prime Minister Edi Rama. He appears to be Mr Clean in a country that's kneedeep in corruption, crime and drug trafficking. Here are some of your thoughts. (24.09.2015)

Cleaning up in Albania. Prime Minister Edi Rama has a tough job. Is progress too slow? How corrupt is the judiciary? Can and should the EU be expected to solve Balkan problems? Tim Sebastian puts Rama under pressure. (23.09.2015)