Edeka and Tengelmann Plan to Create Supermarket Giant | Germany | News and in-depth reporting from Berlin and beyond | DW | 16.11.2007

Germany's largest food retailer, Edeka, has struck a deal with its competitor Tengelmann that would create a retail giant with an annual turnover worth 11 billion euros ($16 billion). 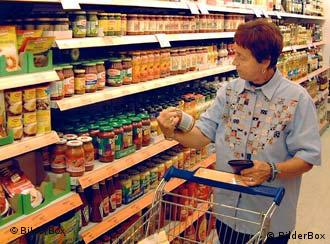 The Tengelmann Group has agreed to sell a 70-percent stake in its Plus discount grocery unit to Edeka, retaining the remainder of the shares itself.

Edeka's move is a blow to its Cologne-based competitor Rewe, which had also been considering making a bid for Plus. The deal also presents a challenge to Aldi and Lidl, Germany's market leaders in the fiercely contested, low-margin discount supermarket business.

Edeka is already Germany's biggest food retailer and the plan to combine Plus with its chain of Netto supermarkets depends on regulatory approval. A decision on the deal is expected within six months.

Tengelmann is letting go of control over Plus after the chain's sales growth dropped by four-fifths in the latest fiscal year. 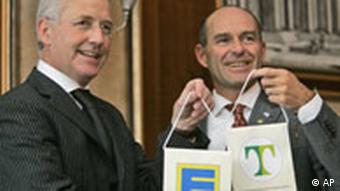 Tengelmann boss Karl-Eriwan Haub, right, and Alfons Frenk, of Edeka, are pleased with the deal

Together, Plus and Netto would have annual sales of about 11 billion euros ($16 billion), enabling them to secure better terms when buying goods. Tengelmann and Hamburg-based Edeka also agreed to cooperate on purchasing for their other retain chains.

"It is important to have big joint purchasing power to get products cheaper from suppliers,'' Martina Noss, an analyst at Norddeutsche Landesbank in Hanover told Bloomburg news. "Plus has lost much money by introducing a large non-food assortment, but it is possible to make money with a discount chain. It is not an accident that the Aldi brothers are the richest Germans.''

Edeka Chief Executive Officer Alfons Frenk declined to say how much the group had paid for its stake at the press conference on Friday, Nov. 16. But he said the deal would put the company in a much stronger position.

"Together, our market presence is a lot stronger," said Frenk. "We can really raise the pressure."

Jobs do not appear to be at threat 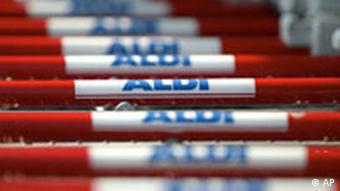 Frenk said the viability of each individual store would be investigated, but that the takeover was expected to create jobs. He also predicted the opening of more than 300 new markets a year.

Plus and Netto currently have a total of more than 4,100 outlets. Under the plans, just over two-thirds of the Plus stores would become Netto shops, but some 800 would retain their old name.

A family-owned company, Tengelmann is Germany's sixth largest grocer and generates annual sales of nearly 25 billion euros from units in 15 countries including the OBI chain of home-improvement stores.

Edeka is Germany's largest food retailer, with sales of 30.7 billion euros in 2006, according to the Lebensmittelzeitung trade magazine. Plus ranks third in the country, and Netto is fifth.

The discovery of genetically manipulated rice in supermarkets in southwestern Germany has for the first time been officially confirmed by agricultural authorities, after EU reports of GM rice elsewhere in the country. (14.09.2006)

What do you think about Edeka's expansion plans? Send us an e-mail. Please include your name and country in your reply.