Edathy pornography affair: The story so far | Germany | News and in-depth reporting from Berlin and beyond | DW | 19.02.2014

A criminal investigation into child pornography has turned into a crisis for Germany's new government. It has already cost one minister his post. The question everyone's asking is: Who knew what, and when? 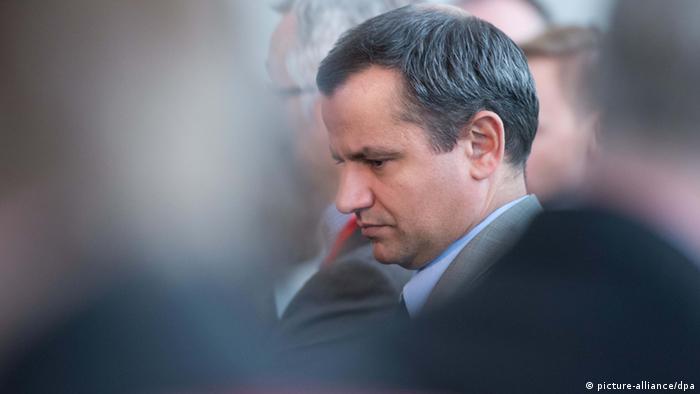 The case started in 2010 when Canadian police began to investigate a global provider of child pornography: Azov Films, based in Toronto, is said to have customers in 94 countries, including Germany.

The Canadian investigators tell the German Federal Criminal Police Agency (BKA) that some 800 Germans are believed to be Azov customers. Among them is the 42-year-old Social Democrat member of the Bundestag, Sebastian Edathy.

The BKA carries out investigations into the child pornography ring. The case is handed to the prosecutor in Frankfurt.

The BKA informs the Federal Ministry of the Interior: Deputy minister Klaus-Dieter Fritsche informs his boss, the then-Interior Minister Hans-Peter Friedrich, that the international investigation has turned up Edathy's name. According to public broadcaster NDR, the 16 state criminal police agencies were also informed about the suspicions against Edathy. 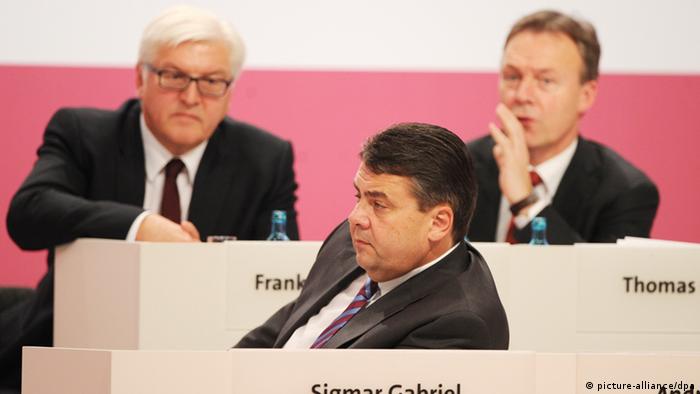 Questions remain about the behavior of Steinmeier, Gabriel and Oppermann (from left to right)

Gabriel passes on that information to the then-head of the SPD parliamentary group, Frank-Walter Steinmeier - now foreign minister - and his successor, Thomas Oppermann - then parliamentary group manager - and the three decide to handle the matter in confidence.

The files relating to Edathy go to Jörg Fröhlich, state prosecutor in Hanover, the capital of Edathy's state of Lower Saxony. He treats it confidentially. According to his statements, he only informs the senior prosecutor, Thomas Klinge.

After an investigation that has lasted three years, the Canadian police hold a press conference at which they announce that they have succeeded in delivering a global blow to a child pornography ring. In the course of Operation Spade, they have freed 386 children and arrested over 300 suspects.

Among the ring's customers was Edathy, who is said to have ordered material from the site between 2005 and 2010. The material consisted of pictures of naked boys assumed to be between nine and 14, in various poses, but not involved in sexual activity. The possession of such pictures is not illegal in Germany.

In response to the media coverage, Edathy asks his lawyer, Christian Noll, to find out if he is being included in the investigations.

Noll asks the Hanover prosecutor for a confidential meeting, which is refused. As the investigation proceeds, it becomes clear that Noll asks other prosecutors if Edathy is being investigated.

The coalition agreement is finally signed and all the posts are distributed - with nothing for Edathy. Oppermann becomes head of the SPD parliamentary group, and informs his successor as group manager, Christine Lamprecht, about the suspicions against Edathy. According to Oppermann, they too decide to handle the matter in confidence.

Sebastian Edathy writes on his Facebook page that he's "unfit for work until probably February 28, 2014."

Edathy's lawyer, Christian Noll, meets senior prosecutor Thomas Klinge in Hanover. According to the prosecutor, Noll said that the films in question were not pornographic and that Edathy didn't hold them any longer.

The Hanover prosecutor decides to carry out undercover investigations against Edathy.

In a letter, the prosecutor informs the president of the German parliament, Norbert Lammert, about the investigation, although there is no request at this stage to lift Edathy's parliamentary immunity. The letter only reaches Lammert five days later. According to the news magazine "Der Spiegel," the letter is opened by someone before it reaches him.

Edathy announces that he is resigning his seat in parliament after 15 years "for health reasons." It's not clear whether he was warned and wanted to make the move before he could be deprived of his parliamentary immunity.

The Hanover prosecutor orders a search of Edathy's apartment and offices. The investigators find only two computers with broken hard drives. That evening a local newspaper reports on the raid, and the case becomes public.

On his Facebook page, Edathy rejects the accusation that he possessed child pornography: "The public claim that I possess child pornographic texts or that I had obtained them is untrue."

Oppermann admits that the SPD leadership knew about the accusations against Edathy in October. He confirms that Friedrich spoke to Gabriel about the case. Oppermann says he had received confirmation from the head of the BKA, Jörg Ziercke. Ziercke denies this.

Prosecutors in Berlin and Hanover say they will look into whether there's a case to answer relating to the betrayal of state secrets.

Members of the opposition in parliament begin to call for Friedrich's resignation. 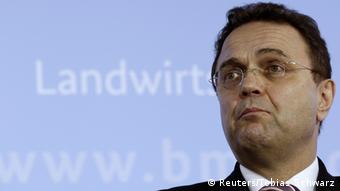 Hans-Peter Friedrich only resigned after pressure from the chancellor

Friedrich finds himself under pressure. The prosecutor confirms at a press conference that Edathy is under suspicion. Friedrich initially says he would only consider resignation if he is investigated for some offense. But by 5 pm, Friedrich, who had become agriculture minister in the new government, announces his resignation. In his resignation statement, he says he's convinced that he had "behaved politically and legally correctly," but that he had been pushed to make the move by the chancellor, Angela Merkel.

Gabriel insists that neither Steinmeier nor Oppermann had spoken to Edathy about the investigations.

Horst Seehofer, head of the CSU, of which Friedrich is a member, accuses the SPD and especially Oppermann of "gossiping" and "breach of trust."

In "Der Spiegel," Edathy denies that he had been warned: he was merely reacting to the reports of the Canadian investigations. But what he'd bought from the Canadian website, he insists, was "unambiguously legal." Nobody knows where Edathy is.

Oppermann rejects all accusations of wrongdoing. According to the "Bild am Sonntag" newspaper, he says his actions were "in accordance with the law in every respect."

The Bundestag confirms media reports that Edathy had reported the theft of his official laptop last week.

Chancellor Angela Merkel comments on the Edathy scandal for the first time. She expresses optimism that confidence in the government can be restored.

Germany's Child Protection Agency demands that any commerce with pictures of naked children must be penalized. Justice Minister Heiko Maas also comes out in favor of stricter laws.

The chairpersons of the three parties meet in the evening to restore trust in the coalition. There is no statement at the end of their meeting.

The Bundestag's Home Affairs Committee tries to shed light on the Edathy scandal. Representatives of the Social Democrats (SPD), the government and the BKA are questioned behind closed doors. Parliament also debates the issue.

A Tuesday meeting between the leaders of the three parties in Germany's coalition government aimed to help rebuild trust following the Edathy scandal. But there's still much to be done, writes DW's Julia Bernstorf. (19.02.2014)

Resignations and revenge will be on the mind of Bavaria's Christian Social Union when German politicians meet this week. But it's not clear just whose head might be on the political chopping block. (16.02.2014)