Ecuador's electoral body has agreed to a partial recount after a request from Yaku Perez and Guillermo Lasso. The pair are vying for the right to face left-wing economist Andres Arauz in April's presidential runoff. 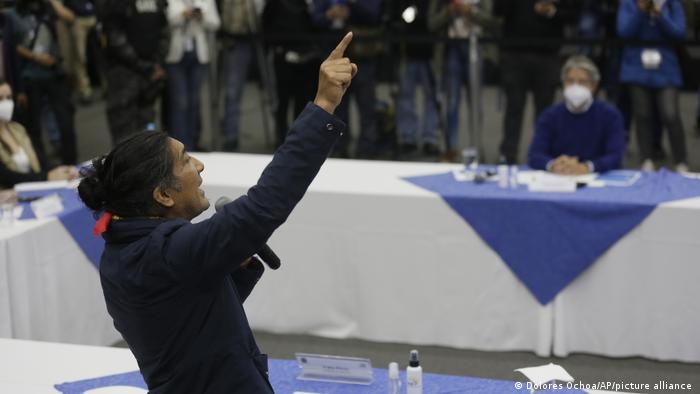 Ecuador's top electoral body on Friday authorized a partial recount of the country's presidential election following a request from two of the candidates.

Left-wing economist Andres Arauz won Sunday's vote, but after two of his potential rivals in April's run-off came to an agreement, a recount will be required in large parts of the South American country.

Environmental lawyer Yaku Perez, 51, and right-wing ex-banker Guillermo Lasso, 65, made the request earlier on Friday after a tight finish in the battle to face Arauz on April 11.

National Electoral Council (CNE) president Diana Atamaint said there would be "a recount of 100% of the votes in the Guayas province," which is the most populous in the country, "and 50% in 16 provinces."

"Once the recount process is finished there will be a definitive statement on the results," she added.

Too close to call between Perez and Lasso

Arauz, a 36-year-old protege of former socialist president Rafael Correa, won with 32.7% of the national vote, though well short of the requirement for outright victory in the first round.

Perez, an indigenous leader who claims there was wrongdoing during the ballot, said a recount would offer a chance "to demonstrate to the country that there is no fraud, that the electoral process was transparent."

Hundreds of indigenous Ecuadorans rallied in support of their candidate on Thursday.

Incumbent President Lenin Moreno's term in office ends on May 24 after he declined to seek reelection.

This publication presents the training procedures and best practices of the biggest network of community media in Ecuador and recommends eight steps and tools to help community media achieve viability.

Nuts, ferns and roots: Ecuador's indigenous communities are bringing a taste of their rainforest gardens to the country's gourmet restaurants. And they're earning a living in the process.