Exit polls show that the socialist candidate fell well short of an outright majority in the first round. That did not stop him from claiming a "resounding victory." 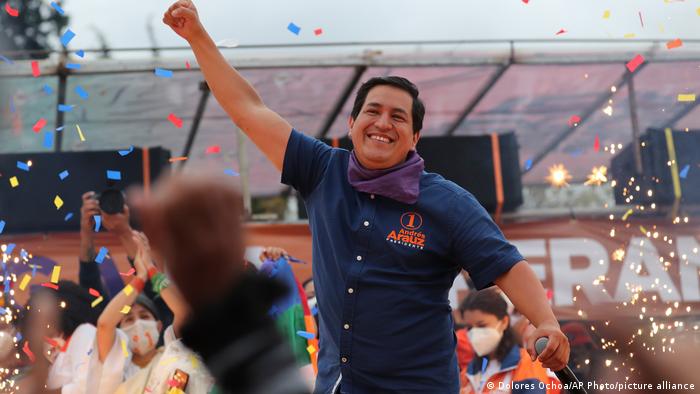 The election will go into a run-off

Andres Arauz claimed victory in Ecuador's presidential election on Sunday, but urged supporters to wait for the official results, which are expected to be out tonight, before celebrating.

Arauz's celebration was short-lived, as an official projection by Ecuador's National Electoral Council revealed that Arauz would have to face off indigenous candidate and lawyer Yaku Perez in the election run-off. The Council based its estimate on 90.4% of the results from 2,425 polling stations selected for a quick count.

According to estimates, Arauz has 31.5% of the vote, with Perez trailing behind at 20.04%. Guillermo Lasso, who was initially expected to face Arauz in the runoff, received 19.97% of the vote, according to the first count.

To win the election in Ecuador, a candidate has to win 50% plus one vote or 40% and a 10-point lead over the rival. Failing this, the election goes to a run-off round.

Arauz is a protégé of Rafael Correa, the former president of Ecuador, who is currently living in Belgium.  An Ecuadorian court convicted Correa in absentia on corruption charges and sentenced him to eight years in prison, but he has so far managed to evade the sentence by staying out of the country.

He remains popular in his home country for presiding over economic prosperity driven by an oil boom and loans from China which funded social programs. His conviction barred him from running as Arauz's vice-presidential running mate.

Ecuador is suffering from an economic downturn, made worse by the impact of the coronavirus pandemic.

A record number of 16 candidates are standing for election. Arauz, who was pursuing a PhD in Economics in Mexico, left his degree mid-way to stand for the election.

Arauz's main rival, the conservative candidate and ex-banker Guillermo Lasso, has a hard sell given the population's distaste for austerity policies.

The socialist candidate follows in the footsteps of former president Rafal Correa and has promised $1 billion (€836 million) in direct payments to families and to overturn the conditions of the $6.5 billion aid package from the International Monetary Fund (IMF).

"We have to continue convincing (people), so that ... our victory, the victory of hope, will be in a single round," Arauz wrote on his Facebook page on Friday. "Let's do this right away."

Lawyer Yaku Perez trailed third in the exit polls, representing an environmental and indigenous movement that is aligned with the anti-Correa left.

Pollsters expect a runoff vote as no candidate has polled more than 50% in the run-up to the election.

However, a low turnout was expected to help the leftwing candidate. Voting is mandatory by law in Ecuador and abstention is punished with a $40 fine.

It is expected that middle-class voters are more likely to pay the fine to avoid catching coronavirus.

Working-class voters, who cannot afford to pay the fine, are more likely to vote for Arauz.

Voters also face fines of up to $100 for failing to wear a mask to the polling stations.

Ex-president Correa and his protege

Outgoing President Moreno is leaving a devastated economy behind him — 2 million people are sliding into poverty and unemployment has doubled to around 13%.

Correa fled the country under the presidency of his former ally Moreno after being accused of corruption for which he was convicted in absentia.

He remains popular in his home country for presiding over economic prosperity driven by an oil boom and loans from China which funded social programs.

His conviction barred him from running as Arauz's vice-presidential running mate.

With protests escalating in Ecuador, President Lenin Moreno has moved his administration out of the capital Quito to the port city of Guayaquil. Moreno claims his predecessor, Rafael Correa, is attempting a coup.