Officials in Ecuador have arrested the prefect of the Pichincha province. President Lenin Moreno and his surrogates have alleged that Paola Pabon and others conspired to destabilize Ecuador ahead of recent protests. 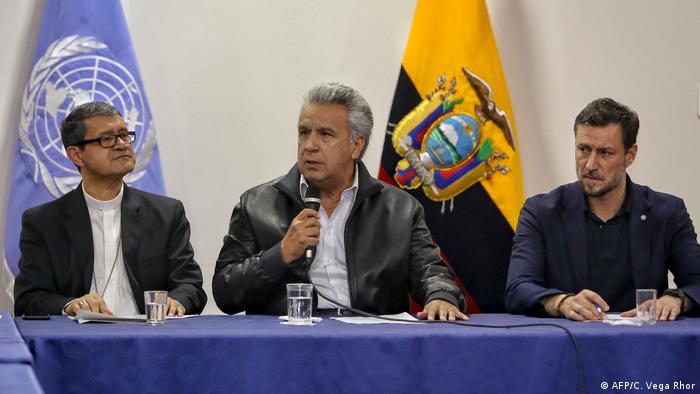 Prosecutors didn't elaborate on their reasons for arresting Pabon. However, over days of protests initiated by indigenous groups, President Lenin Moreno (center in photo) and surrogates accused his predecessor, Rafael Correa, and Venezuelan officials of conspiring with regional authorities and Colombia's FARC guerrillas to destabilize Ecuador.

The president alleged that Correa, Pabon, former Constituent Assembly member Virgilio Hernandez, who was also arrested, and others had traveled "at the same time a few weeks ago to Venezuela" — which he does not consider "a coincidence." Correa and Venezuelan President Nicolas Maduro have mocked Moreno's assertions.

Moreno and Correa have feuded since 2017, when the latter was termed out. The current president, Correa's vice president from 2007 to 2013, embraced neoliberalism after the formerly democratic socialist PAIS Alliance selected him as the party's candidate to carry on Correa's work. The former president left the party in 2018, and his supporters have since formed the Citizen Revolution Movement (MRC). Pabon and Hernandez are members of the MRC.

Mexico reported that former National Assembly President Gabriela Rivadeneira, another of Correa's allies, sought refuge in the country's embassy in Quito over the weekend. She had proposed that the legislature convoke an extraordinary session to address "the destitution of President Moreno" and the holding of early elections — a goal that Correa shares.

Late Sunday, Moreno said he agreed to protesters' demands after meeting with indigenous leaders who had mobilized thousands against an October 2 decree that slashed subsidies and raised fuel prices over 123%. Moreno, who was briefly forced out of Quito during the protests, said he would replace the plan with one that does more to help those most in need.

"Comrades, this deal is a compromise on both sides," Moreno said, invoking the language of solidarity used by his predecessor. "The indigenous mobilization will end, and Decree 883 will be lifted."

Under the agreement, Moreno will withdraw Decree 883, which had included a sharp rise in fuel costs and was backed by the International Monetary Fund, which tied a $4.2 billion (€3.8 billion) funding package to a series of austerity measures. Indigenous leaders, in turn, will call on their followers to end protests and street blockades.

During the protests and the violent official response, seven people were killed, 1,340 were injured and 1,152 were arrested, according to Ecuador's national human rights ombudsman. Labor groups joined the indigenous movements for the protests.

"From our heart, we declare that we, the peoples and nations, have risen up in search of liberty," said Jaime Vargas, the president of the Confederation of Indigenous Nations. "We recognize the bravery of the men and women who rose up."