Hundreds of supporters of former President Rafael Correa have hit the streets to protest the treatment of Julian Assange. Correa and his successor have suffered a major split since the 2017 elections. 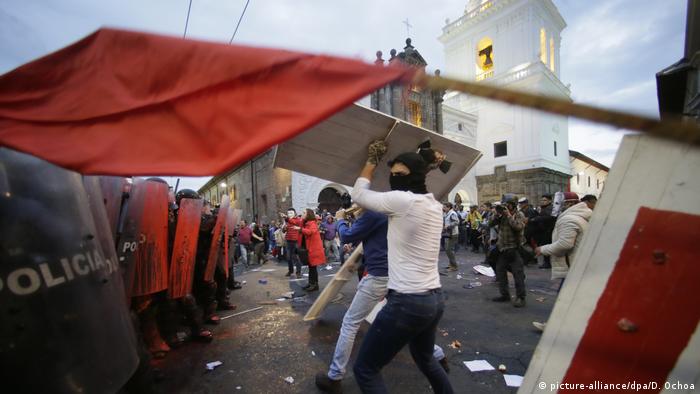 Hundreds of protesters hit the streets in the Ecuadorian capital of Quito on Tuesday to object to the treatment of WikiLeaks founder Julian Assange.

Assange spent seven years under the protection of the Ecuadorian government, but this ended last week when British police were invited into the London embassy, his long-time home, to arrest the whistleblower.

Permissive predecessors: Moreno has leveled serious allegations against Assange, such as hosting a series of hackers at the London embassy whom, he alleges, hacked the cellphones and online accounts of private citizens and Ecuador's government. He also accused Assange of inciting conflict by meddling in international affairs, harassing staff and even smearing feces on the embassy's walls. He placed the blame for Assange's excesses on Correa's permissive attitude.

Soured relationship: The declining relationship completely collapsed after the publication of an anonymous website that detailed corruption allegations against the Moreno family. WikiLeaks has shared the leaked materials, dubbed the INA papers, but has denied being behind their publication. Moreno has more or less directly blamed Assange for the embarrassing revelations.

The IMF deal: In February, Ecuador ended Correa's decade-long estrangement with the IMF, inviting the organization back into the country and accepting a $4.2 billion loan to support the economic policies of the Ecuadorean government, tying in with a broader international support effort totaling $10 billion. Correa has criticized the deal, saying Moreno is just is trying to obscure his government's efforts to privatize the oil industry. Protesters say that as a result of the IMF deal and the associated neoliberal reforms, thousands of public sector employees have been sacked and oil prices have risen.

Correa vs Moreno: The two politicians have been in a protracted feud since Moreno's 2017 election victory, secured with Correa's backing. Since then, the former friends have fallen out, with Correa accusing Moreno of betraying the ideals of his "21st century socialism" platform and Moreno accusing his predecessor of working to destabilize the government and even spying on his office.

WikiLeaks founder Julian Assange first grabbed headlines by leaking US military secrets in 2010 and has remained the center of a global controversy ever since. DW brings you a look at what led up to his dramatic arrest. (13.04.2019)

Ecuador's president has accused Indigenous protesters of attempting a coup. Clashes between protesters and security forces have left six people dead, and six of the country's 24 provinces are under a state of emergency.