Strasbourg has closed the books on Yulia Tymoshenko's complaint against Ukraine, finding a "friendly settlement." The former prime minister had alleged unfair proceedings against her in 2011 over a gas contract. 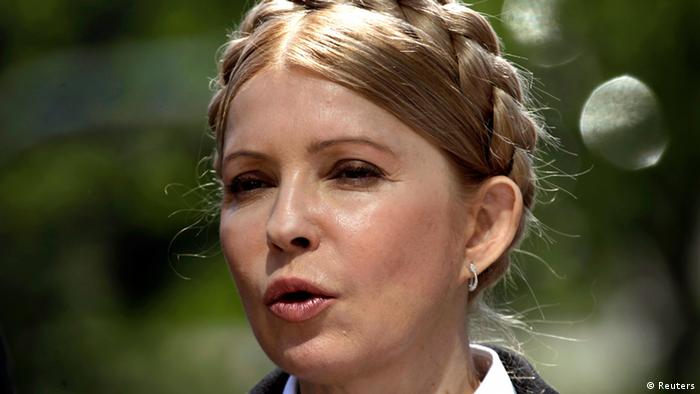 The European Court of Human Rights (ECHR) struck Tymoshenko v. Ukraine from its docket on Thursday. Former Prime Minister Yulia Tymoshenko, now 54, had brought the suit against Ukraine in 2013, alleging that prosecutors had stacked the deck against her in a politically charged trial that left her imprisoned - and ailing - until the 2014 ouster of President Viktor Yanukovych. The case primarily concerned the criminal proceedings against her on charges of embezzlement and abuse of power relating to contracts negotiated with the Russian energy company Gazprom for the supply of gas to Ukraine.

"The court took note of the Ukrainian government's declaration in which they admitted that the criminal prosecution of Ms. Tymoshenko had been politically motivated and in which they acknowledged a violation of her Convention rights, and of various measures taken by the government as a consequence of those violations," The court said in a statement on Thursday, referencing the European Convention on Human Rights. "Following Ms. Tymoshenko's agreement to the terms of that declaration, the court considered that it implied a friendly settlement between the parties and therefore found no reason to continue its examination of the case."

Tymoshenko complained that authorities had violated her right to a fair and expeditious trial, punished her for violating a law that did not exist, barred her from seeking an effective remedy, curtailed her freedom of expression, and punished her multiple times for the same perceived offense. Additionally, she claimed in her lawsuit, the government had ignored limitations on the restriction of rights, engaged in inhumane and degrading treatment, and violated her right to privacy.

In April 2011, Ukraine's regime opened lengthy proceedings against Tymoshenko, who had served as prime minister in 2005 and from 2007 to 2010, alleging that during her time as head of government she had made an illegal order for the signing of a contract concerning gas imports. On October 11 of that year, the court convicted Tymoshenko on all charges, sentenced her to seven years' imprisonment and banned her from holding office for three years. In August 2012, the court upheld its ruling.

Tymoshenko has sued Ukraine in Strasbourg before. In a 2013 chamber judgment - not yet a final ruling - the ECHR held that authorities had subjected Tymoshenko to unlawful pretrial detention and denied her the possibility of seeking compensation for her unlawful deprivation of liberty. Her current complaint concerned only the fairness of the criminal proceedings against her.