UN chief Ban Ki-moon has said the mission to fight Ebola should be wound down quickly once the virus is under control in West Africa. He also called for an end to discrimination against people working with Ebola. 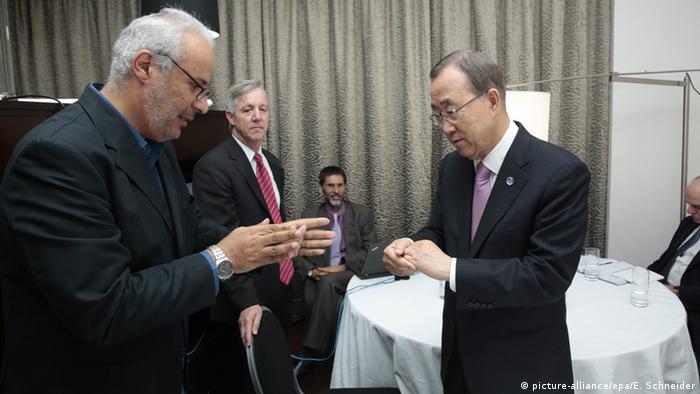 UN Secretary General Ban Ki-moon has made a 36-hour tour of Ebola affected areas in West Africa to highlight work being done by the United Nations.

The UN emergency Ebola response mission, UNMEER, was set up in September to coordinate policy and logistics across governments, charities and healthcare workers in West Africa.

"There's a tendency that missions go on because of continuing political instability and conflict. Ebola is a very urgent and unprecedented epidemic, therefore we cannot take too long in eliminating it," Ban said.

"That is why I am sending a political message. It is not because we have made any decision on when UNMEER should end, but it should be a short-term mission."

UNMEER had set an initial December 1 target of getting 70 percent of Ebola patients in treatment and 70 percent of bodies safely buried, but Ban said the mission had missed that deadline. "My intention is not to keep UNMEER longer than one year. If that isn't the case, people will regard it as a failure," he said.

In Guinea, Ban said the spread of the disease had "noticeably slowed down" in parts of the country but in the south it was "worrying to see that the number of people ill is continuing to rise."

Ban visited treatment centers and urged countries to avoid discriminating against healthcare workers fighting the virus: "There should be no discrimination for those who have been working or helping with Ebola. Those people are giving all of themselves," Ban said.

A total of 7,373 people have died of Ebola in the three worst-affected countries, Liberia, Sierra Leone and Guinea, according to the latest World Health Organization figures.

Ban traveled with Margaret Chan, head of the WHO, David Nabarro, the UN coordinator for the fight against Ebola and Anthony Banbury, the head of the UN Mission for Ebola Emergency Response or UNMEER.

Voters who turned out for senate elections in Liberia were met with health workers at the door of polling stations to check for Ebola. The elections had been delayed twice due to the outbreak. (20.12.2014)