German athletics coach Thomas Springstein has been sacked by his club and faces criminal charges after an investigation found banned substances at his home. He is also accused of supplying steroids to minors. 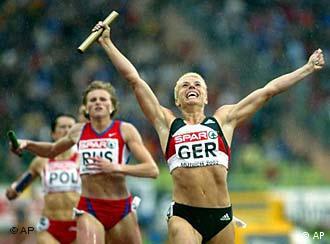 Grit Breuer, Springstein's partner, is also embroiled in the scandal

The specter of the former East Germany's doping culture reared its ugly head again on Thursday when leading German athletics coach Thomas Springstein was suspended by his club SC Magdeburg after a banned substance was found at his house during a state prosecutors' investigation into alleged drug use.

The on-going investigation led to authorities searching the trainer's home on Tuesday and the discovery of medicines containing a banned hormone, state prosecutors said in a statement.

Springstein's club SC Magdeburg took action against the coach, who is allegedly on vacation in Greece, when it was revealed that prosecutors believed there were "concrete signs" that Springstein had supplied several members of his training group with performance-enhancing substances which could have harmful side-effects.

"The accused is suspected of giving medical preparations with banned doping substances to members of his training group, some of whom are still youths, to increase their performances," the prosecutors' statement said. It is reported that Springstein administered steroids to at least one athlete among four 17 and 18-year-old women he was training for SC Magdeburg.

The athletics club added that it reserved the right to start legal proceedings against the 46-year-old and was considering doing so. Springstein could face a prison sentence of between one and 10 years if found guilty of the charges.

Springstein's lawyer issued a statement saying the accusations were "absurd." Peter-Michael Diestel said "The accusations reported by the media are totally fabricated." 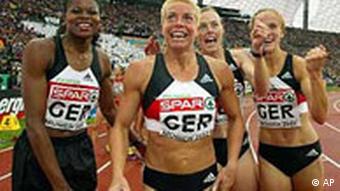 Grit Breuer (center) is accused of missing a drugs test.

Springstein is not alone in the developing scandal. His partner, the German sprinter Grit Breuer, the former 400 meter European champion, is also in trouble after missing a random drugs test on Wednesday, German anti-doping agency NADA confirmed on Thursday. Breuer, who is believed to be in Greece with Springstein, is accused of failing to tell the DLV and NADA of her whereabouts.

"That goes against doping guidelines and has consequences," explained NADA spokesman Matthias Blatt. "Athletes have to let the association know if they are away from their residence for more than three days."

Breuer's absence was noticed after the head of NADA tried to contact the five-time European champion on Wednesday. "This is a violation of doping guidelines, which will have consequences," Blatt told German sports agency SID.

Breuer is also represented by Springstein's lawyer Peter-Michael Diestel who said the sprinter had informed SC Magdeburg that she was taking a holiday. "My clients will make a constructive contribution towards an explanation after these absurd accusations," the lawyer said. "I have contacted the state prosecutor investigating the case to inform him of that," he added.

No strangers to controversy

It is not the first time that the duo has been embroiled in a drugs related controversy. Breuer and her East German compatriot Krabbe, both coached by Springstein, were suspended for two years for using the banned steroid clenbuterol in 1992. Krabbe won the 100 meter and 200 meter world titles in 1991 while Breuer won the 400 meters European title in 1990.

Springstein said in 1992 he had given Krabbe and two of her club mates the drug, which acts as an anabolic stimulating the conversion of fat into muscle, but did not know it was a banned substance. 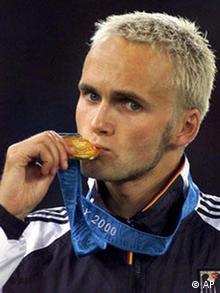 German sprinter Nils Schumann has distanced himself from Springstein.

Meanwhile, Germany's 800m Olympic 2000 champion Nils Schumann announced on Thursday he will no longer work with Springstein in the wake of the doping revelations. "Nils Schumann will discuss further measures and his sporting future with his club and the German Athletics Federation in the next few days," read a statement from Schumann's manager Frank Thaleiser.

Schumann, who did not start at the 2004 Olympic Games in Athens due to injury, was said to be shocked at the drugs allegations surrounding his former coach.

Putting The Lid On Doping

Germany is ramping up its battle against performance enhancing drugs by setting up a national anti-doping agency. Both politicians and sports organizations hope the move will eliminate the use of steroids by athletes. (July 15, 2002)

After being pumped with performance enhancing drugs for years on end, former East German athletes are finally being financially compensated. But they still have to live with the damaging side-effects. (November 17, 2001)

Doping figures for 2002 show that positive testing for banned drugs has remained constant over the past three years - a far cry from the alarming doping cases that emerged in East Germany. (February 26, 2003)