Nuclear power plants need to be dismantled piece by piece over time because many of their parts stay radioactive for years. This is being done near the town of Lubmin, where a reactor demolition project is underway. 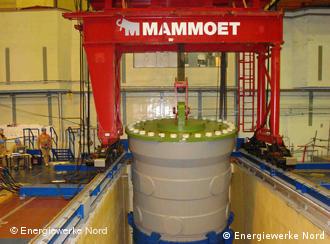 The Lubmin plant's Soviet-engineered reactors were unsafe by Western standards.

Lubmin is a small, little-known Baltic resort in northeastern Germany. Scarcely one kilometer, or half a mile, removed from the town's eastern boundary, several hulking and dilapidated cement bunkers stand flanked by rusty scrap metal. They are the remains of what was the largest nuclear power plant of the German Democratic Republic. Inside, as many as five Soviet-engineered pressurized water reactors once fed electricity into the grid.

Shortly after the 1990 fall of the Berlin Wall, the reactors were shut down. They were deemed unsafe based on Western standards.

Now, 15 years later, a demolition process which began in 1994 is still underway. It is a painstaking job, because although all the nuclear fuel rods have been removed, individual parts of the nuclear plant are still radioactive and need to be laboriously dismantled and stored. 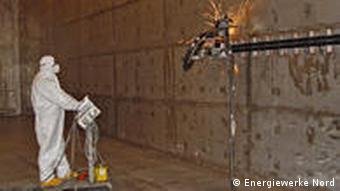 "We used to operate the reactors; now we're dismantling them," said Joachim Griep, a supervisor of the project. He started working at the Lubmin nuclear plant in 1977 and now works for Energiewerken Nord, a state-run concern responsible for dismantling the reactors.

Directly adjacent to the defunct nuclear power plant stands a new building secured by a tall barbed-wire fence: a nuclear transfer station. The main hall of the building is larger than two football fields and houses highly radioactive fuel rods along with the radioactive remains of the reactors, which eventually are completely dismantled and temporarily stored.

A guard at the entrance to the station meticulously checks identification and passes, and visitors are issued overalls, overshoes, and dosimeters.

Parts of Lubmin plant will be used for a new industrial zone.

Griep inserts his electronic identification into a card reader, which beeps as a weighty door swings open in near silence. He walks a few steps alongside a massive concrete wall designed to shield against radioactivity before stopping in front of a large pane of glass.

Behind the glass a remote-controlled saw with a four-meter-long blade is cutting away at an old steam generator, a metal cylinder the height of a house. When the nuclear plant was still operational, the steam generator had turned hot water from the reactor into steam in order to power turbines.

The band saw cuts the steam generator into manageable pieces which are about one meter long and weigh no more than 500 kilograms (230 lbs). Doing so takes a long time as the saw blade moves slowly through the extremely thick walls. Six months are needed to completely dismantle the part.

Radioactive components including countless pumps, pipes and cleaning sludges end up in one of the eight halls of the transfer station. They are packed into containers and 500-liter (130 gallon) specialty barrels painted blue. On the exterior is steel lining with cement inside it and yet another layer of lead-infused steel designed to contain radiation. Several thousand such vessels and similar secure containers are stacked inside the 18-meter (60 feet) high halls.

As of 2015 some waste from the plant will be permanently stored.

The actual reactors themselves have yet to be dismantled. The metallic behemoths weigh 230 metric tons and are laid out next to one another as if they were in a funeral home.

"At the moment the reactors are still too radioactive to take apart," Griep said. "So we'll leave them here for 50 to 70 years until the radioactivity has worn off enough."

On the other hand, after 2015 the materials that are already disassembled and encapsulated will be ready for incremental transport to the Schacht Konrad repository for low- and mid-level radioactive waste in Salzgitter, in northern Germany.

Where the highly radioactive fuel rods will eventually be stored is still uncertain because plans to store them in the German nuclear waste repository in Gorleben are a topic of controversy.

About 1,500 cubic meters (50,000 cubic feet) of material will be transferred to Schacht Konrad for each of the plant's nuclear generating units, enough to fill two row houses. In all, putting the Lubmin nuclear plant out of service will cost German taxpayers about 2.4 billion euros ($3.3 billion).

Experience from Lubmin indicates dismantling a single nuclear generating unit costs about 500 million euros. Critics say doing so is too precarious; that nuclear power plants should be sealed and left standing for decades before risking demolition.

Dieter Rittscher, executive director of EWN, disagrees. "The assumption worldwide is it is possible today to dismantle nuclear power plants without problems," he said. 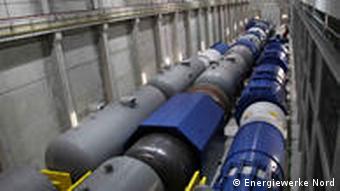 Critics say dismantling is too risky.

Dismantling a nuclear reactor and storing its pieces underground may be safer than simply leaving it standing. Otherwise the possibility of radioactivity leaking out over the course of decades can not be ruled out, Rittscher says.

Nevertheless, the Lubmin nuclear power plant will not be demolished entirely. Plans include creating a new industrial zone include using several of its uncontaminated halls. And the enormous former turbine hall has already been put to a new use: work has already begun there on industrial cranes and ship components.

Russia strengthens ties with India in deal on nuclear projects

A deal between Moscow and New Delhi will see Russia building more nuclear power stations on Indian soil. It came as the leaders of both countries met to work on developing closer ties. (07.12.2009)

A nuclear power station has been accused of slowing its energy production to extend its lifespan until the nuclear-friendly Christian Democrat-Free Democrat coalition came to power, it was revealed Tuesday. (13.10.2009)