E-bikes could offer car alternative to urbanites | Environment | All topics from climate change to conservation | DW | 16.03.2012

The electric bike industry is booming. What was once seen as a bicycle for retirees is now cool and trendy. The newest riders are young, stylish and earn good money. They see their e-bike as a car alternative. 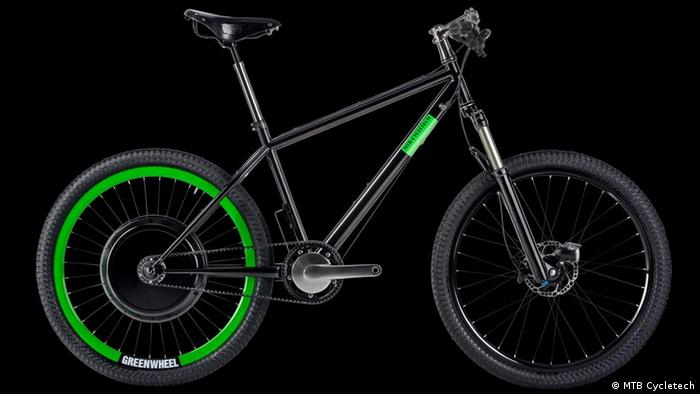 High school student Paul pedaled faster, leaving all the other bikers behind as he turned. Unlike the others, he was neither out of breath nor sweating.

"This is awesome!" 15-year old Paul called out, grinning, to his brother Friedemann in the crowd.

Paul is on a test track at Cycolonia, a bicycle fair in Cologne. He is testing a Pedelec or Pedal Electric Cycle, an electric bike.

"I put the bike on e-drive and that's giving it speed!" Paul shouted.

He came to stop with a screeching halt, got off the bike and pushed it into Friedemann's hands. His brother also wanted to see what it felt like to go from to from zero to 25 kilometers (15.5 miles) per hour in a short time on a bike. The cyclist just needs to turn on the electric motor to get a boost. The more he pedals the more of a boost he gets from the electric motor.

It's not just about the speed 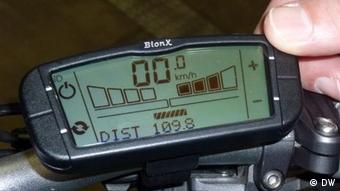 This panel is used to control the electric motor

Friedemann whizzed through the hall at Cycolonia. He put the motor on the maximum setting.

"The motor helps a lot when pedaling," Friedemann said.

But he was quick to add that he wouldn't buy such a bike because it is "granny like." The design features high handlebars and a low crossbar that would allow even someone wearing a long skirt or dress ride it.

"The battery box in the back looks awkward," Friedemann added.

The battery weighs around 4 kilos (9 pounds), depending on how much starting assistance the biker needs, it holds for 60 to 100 kilometers. After that, the biker needs to replace it or charge it for four hours.

Across from the test track is a flashy red bike with large fork and thick tires next to a retro-looking, cream-colored mountain bike. Friedemann and Paul cannot believe that these two bikes are also electric. The battery is hardly noticeable. 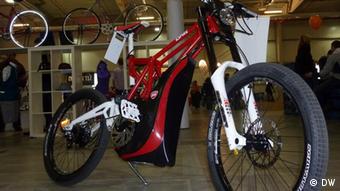 An E-Fully, an electric mountain bike worth about 7000 euros

"That's definitely for me," Friedemann said. "It's cool."

A man in a rather trendy black jacket agrees. He works in insurance and is looking for an alternative to a car.

"I think an e-bike can replace a car in the city because you can go up or downhill without arriving all sweaty at the office," he said. 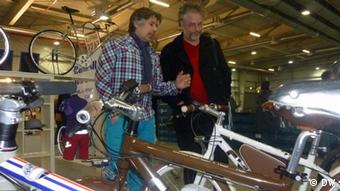 That is important for him because he wants to go to work in a suit and not in workout clothes. The stylish bikes were designed by Florian Dobner who has discovered a niche market. More than 200,000 e-bikes are sold every year in Germany, not just to retirees but also younger people. And a lot more young parents want to take their small children along in bike trailers.

"Most of my customers live in the city, make good money and use e-bikes instead of cars, Dobner said.

"Of course, they want a stylish bike that represents a cool lifestyle," he added.

Cool, but not great for parking

The stylish e-bikes cost around 3,000 euros ($3,924). Regular electric bikes can be bought for half that price.

"That's absolutely overpriced," Paul and Friedemann said, noting that neither of them could afford such a bike.

But the price is okay for the insurance man. He would be saving money on gas, parking fees and car insurance, he noted. 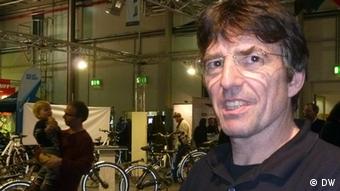 But expensive electric bikes are more likely to get stolen, especially at night.

He believes that the solution would be garages for bikes.

In Cologne, garages for bikes at tram stops can be rented for around 70 euros ($91).

"Our problem is that we haven't come to a point where car parking lots can also be used for bikes," Koenekamp said. 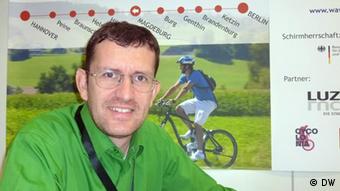 "The e-bike is the solution to cities drowning in cars," he said, noting that the bikes are fast, quiet and have no carbon emission.

Palmer is trying to find 200 riders for his Electric World Advanced Vehicle Expedition (E-Wave) from Hannover to Berlin. He would especially like young people like Paul and Friedemann to join E-Wave to further his goal of replacing cars with e-bikes in cities.

Electric bikes are well-established in Switzerland and the Netherlands. And they are a mega trend in China where there are more than 120 million electric motorcycles and bikes.

Meet Hiriko, a new electric car that can fold to one-third the size of a Smart car. But its Spanish and American designers may face an uphill battle selling it to the European public. (27.01.2012)

The German city of Dortmund recently witnessed a global phenomenon on its own doorstep as hundreds of cyclists took to the streets under the 'Critical Mass' banner to call for more cycle-friendly cities. (24.08.2011)