Meet Hiriko, a new electric car that can fold to one-third the size of a Smart car. But its Spanish and American designers may face an uphill battle selling it to the European public. 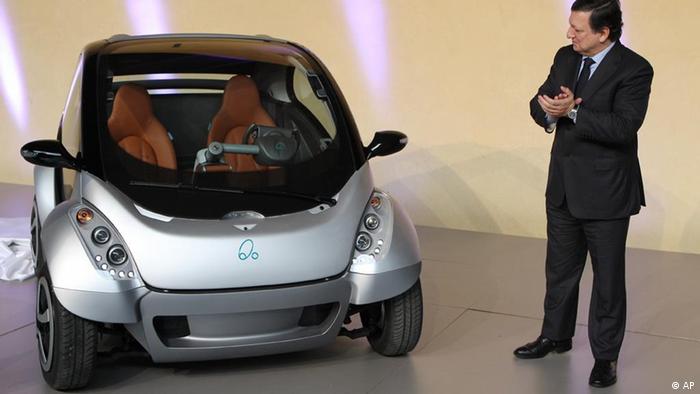 A transatlantic team of designers and builders have created a new kind of electric car that not only saves gas but saves space.

The Hiriko automobile, which was conceived at the Massachusetts Institute of Technology in the United States, but built in Spain's Basque country, was finally unveiled at European Union headquarters in Brussels this week.

Hiriko, which is the Basque word for "city" or "urban," aims to revolutionize automobile design for those tight European street and parking spaces.

For decades, European car models like the Fiat 500 and the Mini have tread in this territory before, but the Hiriko actually folds up into itself vertically, like a baby stroller. As a result, when compacted, the car only takes up one-third the parking area of a Smart car. 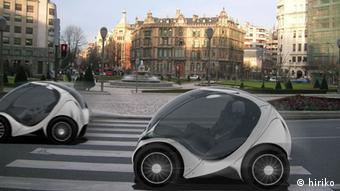 To the energetic beat of Basque music in honor of the car's birthplace in rural Spain, on Tuesday, European Commission President Jose Manuel Barroso climbed into the first-ever model of the two-seater. He positioned himself behind the touch-screen-like steering wheel, and gave it a big thumbs up.

"It is European social innovation at its best," he said. "Firstly, it is a successful example of how to give a new lease of life to traditional industrial sectors by contributing to address major modern societal challenges, in that specific case, urban mobility and pollution."

Meanwhile, Will Lark, an MIT engineering doctoral student, and one of the car's lead designers, recalled that he had been advised to actually reinvent the wheel - so he and his team did.

"There are four motors built into the wheel," he explained. "So that represents the central engine that would've been in the front of the vehicle."

This design choice explains how the car can be less than two meters (6.5 feet) long: the engine is split up and contained in the wheels, so it has four-wheel steering and four-wheel drive, powered by two lithium-ion batteries. In fact, each wheel can turn 90 degrees so the car can parallel park extremely easily. 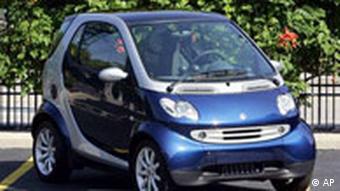 Lark remains confident that though many models of plug-in cars have come and gone without electrifying the market, Hiriko is finally the one that will take off.

"It combines a number of unique technologies in a way that other cars do not," he said. "What you tend to find with an alternative car is that they make incremental changes to already existing chassis and what we've done here is really redefine what the vehicle is."

But, anaylsts warn that even new, flashy electric compact cars may not sell necessarily with the general public. After all, in the last decade, Daimler has only sold around one million units of its cute Smart car worldwide.

"Smart is an established concept and it's backed by Daimler and even that struggled," said Tim Urquhart, an auto industry analyst with IHS Global Insight, in an interview with Deutsche Welle.

"So for any new entrants into this market, especially a startup with no experience, it's going to be difficult. But you've got to take your hat off to these guys for the innovation." 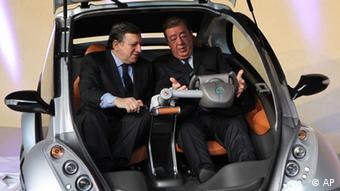 A possible future in car-sharing

It wasn't the traditional European automakers that took the lead, rather, it was seven small companies in Vitoria, Spain - the heart of northern Spain and Basque country - that decided they would bring the MIT concept to life.

In fact, this new startup has priced the new car aggressively, at 12,500 euros ($16,000) each, which could make it attractive for cities across Europe looking to expand their car-share programs. Already, Barcelona, Berlin and Malmö, Sweden have expressed interest. In December 2011, Paris began its new electric car-sharing program, Autolib.

In the meantime, Vitoria's mayor, Javier Maroto, isn't shy about promoting his city as a model.

To kick-start demand for its electric Smart cars, Daimler plans to introduce several new financing models at the IAA international automobile show in Frankfurt. One option is to sell cars, but lease batteries. (12.09.2011)

The German government wants to see one million electric cars on the nation's streets by 2020 and is doubling its investment in research and development. But some wonder if government intervention is the right strategy. (17.05.2011)