Pedal power for cyclists′ rights: Critical Mass comes to Germany | Germany| News and in-depth reporting from Berlin and beyond | DW | 24.08.2011

The German city of Dortmund recently witnessed a global phenomenon on its own doorstep as hundreds of cyclists took to the streets under the 'Critical Mass' banner to call for more cycle-friendly cities. 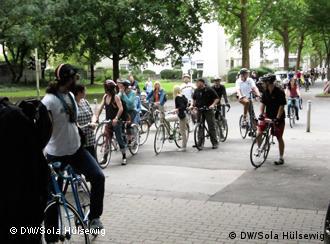 Around 80 cyclists have gathered smack in the middle of a central square called Friedensplatz in the western city of Dortmund. They're chatting amongst themselves, waiting for the signal to begin a ride around town. Their cause: A bicycle-friendly city and more bike paths.

Word of the gathering spread via flyers, Facebook and word of mouth, but no one person has organized this gathering and no official demonstration, as such, was called. There are no banners and no slogans. That would have required that the riders registered their protest with City Hall. This way, the gathering remains in a grey zone.

In amongst the pack a space suddenly opens up and a police officer appears from within the throng. He wants to prevent the protest ride from going ahead.

"I fully understand why you're all here, but from a policing point of view it can't go ahead," he tells the riders. "You can imagine that if you ride through a cross-road against oncoming traffic as well as traffic coming out of side-streets, a car could make a turn and suddenly be faced with this mass of bikes in front of them. It's great that you want to have more bike paths, but conditions here are too dangerous and we cannot accept this." 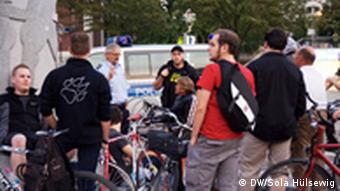 Police kept a watchful eye over the Critical Mass cyclists

The cyclists disagree: "So does this mean we're no longer allowed to meet and ride our bikes through the neighborhood?" one man asks angrily.

The group insists on going ahead with the veiled protest ride, whilst the police officer insists it's not going to happen. According to German road rules a group of more than 15 cyclists constitutes a club, which means they're allowed to ride next to one another. Because of this, the cyclists here should legally be able to crowd the street and slow down traffic.

They're copying a similar protest ride by cyclists in the US city of San Francisco back in 1992 which came to be known as "Critical Mass". It was an attempt to draw attention to the difficulties of trying to ride bicycles around a city dominated by cars. The Critical Mass movement has since spread to cities around the world. In Budapest last year, for example, it attracted around 80,000 riders.

Meanwhile, in Dortmund, ever more cyclists are joining the group, which is beginning to circle Friedensplatz. Around 200 bikes are now on the road, their riders mostly between the ages of 20 and 40. Their rides come in all shapes and sizes, ranging from rusty deathtraps without brakes up to high-end road bikes worth 2000 euros ($2,900) a piece.

They're being chaperoned by a somewhat annoyed police convoy barking at them through a megaphone, threatening to issue traffic obstruction fines to anyone they manage to catch.

The group continues though, adamant that the law is on their side. In 2010, a federal court ruled that cyclists were no longer obliged to use bike paths, and could ride freely on German streets. Such rulings have emboldened cyclist lobby groups and led to more people using bikes to get around town.

Alexander Kopplow runs a bike shop in Dortmund, and says cycling has become much more popular in recent years. He says 25 years ago his store began as a small workshop; now he sells bikes at the high end of the scale. 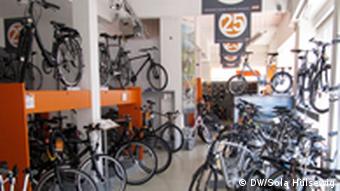 Kopplow says his bike shop had quite earnest beginnings

"The timing was just right. Back then it was helped along by the green movement. People wanted to eat healthy food and not blow exhaust fumes into the air," he told Deutsche Welle. "So hard-core environmentalists were our original customers. But over time, the quality of our bikes rose and demand from other groups also increased, leading to the boom we're seeing today."

And Kopplow is certain the bike boom will continue, especially with living costs and fuel prices on the rise. This has been confirmed by a study conducted by the German Mobility Panel on behalf of the Transport Ministry.

Back in the center of town, the ranks of Critical Mass cyclists have thinned somewhat as they arrive back at their starting point after a half-hour's worth of riding. Police issued five people with fines and said they'd do the same next time unless the protest ride was registered with the City. The cyclists say they're planning another Critical Mass ride through Dortmund in a month's time, but maybe even earlier.

Welsh industrial wasteland is reborn as a popular park

The demise of industry came as a blow to many in the United Kingdom. In South Wales, an industrial graveyard has been turned into a park to serve humans and nature. A decade on, it's both popular and a money-spinner. (26.04.2011)

Aiming to increase its rate of biking commuters while gearing up the city's infrastructure, Copenhagen is paving the way for the most creative innovations in cycling across Europe. (23.03.2011)

For the first time in history, more people live in cities than rural areas. The "European Green Capitals" program aims to ensure cities rise in style to the environmental challenges facing them. (15.10.2010)