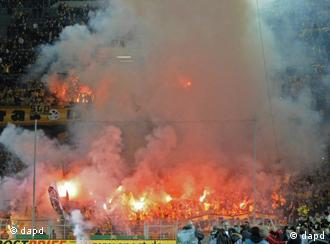 Dresden fans got out of hand at the Dortmund game

Second division Dynamo Dresden could be banned from next season's interleague German Cup after the national soccer federation, the DFB, on Wednesday requested the team's suspension following crowd trouble in a second round defeat against Borussia Dortmund last week.

The DFB's disciplinary committee has recommended banning Dresden from the 2012/2013 German Cup, but the final decision rests with the federation's sports court. So-called hooliganism is a growing problem in German soccer stadiums.

The DFB also said that Dortmund should be fined 10,000 euros ($13,800) for not preventing Dresden fans from bringing flares into the stadium. More than a dozen fans were arrested.

Dresden repeatedly warned in the past

The DFB said its suspension proposal comes after repeated warning and fines against Dresden in the past few seasons.

"After six convictions with fines in the seasons 2009/2010 and 2010/2011, as well as two in the current season, the DFB had warned the club of tougher sanctions, if their fans misbehaved again," the German Soccer Federation said in a statement.

Dresden will have the opportunity early next week to present its case to the sports court.

"This really surprised us; we didn't expect it. We think the punishment is draconian and completely over the top," Dynamo Dresden boss, Volker Oppitz, told Germany's SID sports news agency.

Dresden estimates that a year without participating in the German Cup would cost it about 1.5 million euros.

Dynamo Dresden won promotion to the second division in a skin-of-their-teeth play-off last season, after five years in the doldrums. But like a nasty virus, the club cannot shake the violent element among their fans. (27.10.2011)

The ugly conclusion to Saturday's Bundesliga match between Frankfurt and Cologne has added to speculation that hooliganism is rising in Germany. But some observers believe the clubs need to communicate better with fans. (09.05.2011)