A massive whale sculpture saved the life of a metro driver in the Netherlands, after his train ploughed through the barriers at the line's final station. The carriage was left perched several meters above the ground. 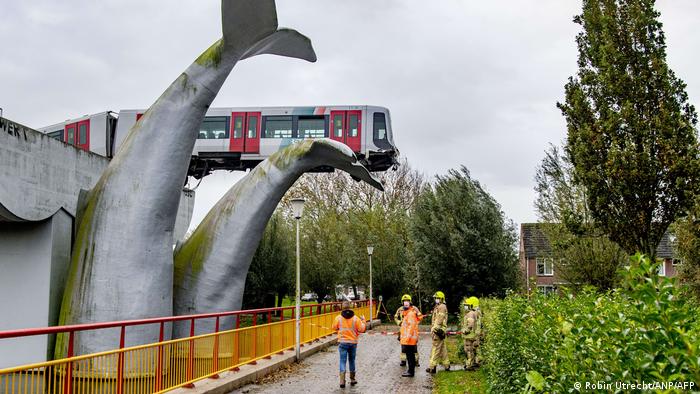 The driver of a metro train in the Netherlands escaped serious injury on Monday after his train overran the tracks, only to come to a halt atop a sculpture of a giant whale's tail.

The train crashed through stop barriers at the final station of De Akkers in Spijkenisse, near the Dutch port city of Rotterdam. The accident occurred on a raised platform, ten meters (30 feet) off the ground, where the carriage could have easily plummeted into the water below.

BBC journalist, Anna Holligan, tweeted a video of the train resting precariously upon the whale fins.

Fortunately, the plastic sculpture of the tail stood in the way and was able to hold the weight of the metro carriage. The driver was uninjured and was able to get out of the vehicle unassisted. No passengers were on board at the time.

Locals were reportedly woken up by a load crash shortly after midnight on Sunday.

News of the unique crash spread and nearby residents quickly gathered on late Monday morning to witness the sight for themselves. However, authorities warned people to stay away and stressed that coronavirus restrictions were still in place. 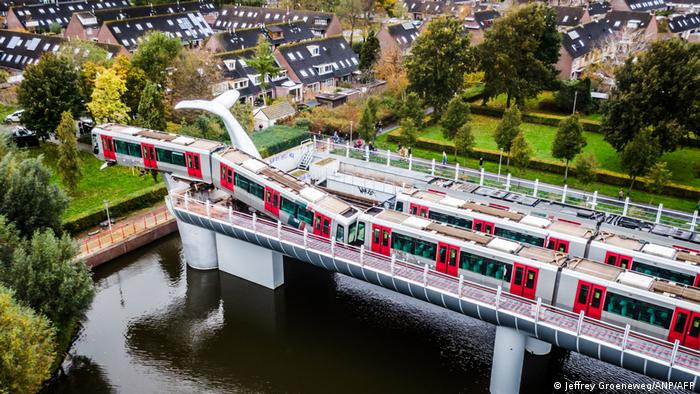 Engineers worked to remove the carriage, concerned about the stability of the structure with the high winds.

"A team of experts is investigating how we can make it safe get it down," Carly Gorter, a spokeswoman for the local security authority said. "It's tricky," she added.

Maarten Struijs, the architect who designed the whale sculpture, expressed his astonishment and relief that the structure had played a life-saving role.

"I'm surprised it's so strong," he told Dutch broadcaster RTL. "If plastic has been standing for 20 years, you don't expect it to hold a metro carriage."

Authorities launched an investigation into the accident to ascertain how it was possible for the train to break through the barriers. The driver has been held for questioning over the incident.