A protest against the Dutch government and its coronavirus restrictions in The Hague was ended by police. The demonstration comes as the Netherlands readies for a parliamentary election spread over three days. 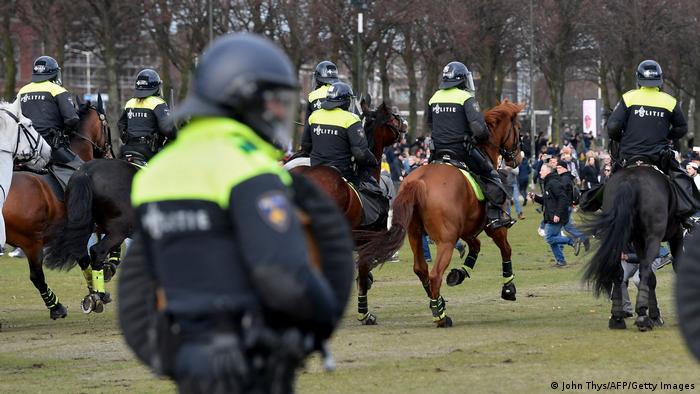 Dutch police, some mounted on horseback, dispersed hundreds of anti-lockdown protesters from the The Hague's grassed Maliveld field on Sunday on the eve of the Netherlands' snap general election.

Authorities used water cannon, horses and batons in a effort to disperse demonstrators. A warning shot was fired at one point after protesters kicked a police dog and threatened its handler, police said in a statement.

At least 20 people were arrested, with two demonstrators sustaining injuries from police dogs, according to the statement.

Several carried banners with the text: "Love & Freedom: No Dictatorship." 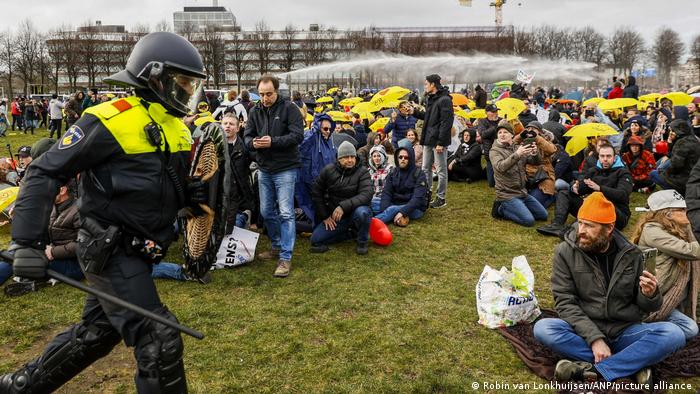 "There might be a virus, but the shutdown of the total society is not proportional," retired 68-year-old protester Michel Koot told AFP.

Train arrivals in the Dutch city were briefly halted when authorities asserted that the maximum number of protest participants had been reached.

The Hague rally, following similar standoffs  in Amsterdam and Eindhoven in recent weeks, reflected impatience over lockdowns still reluctantly supported by a majority of voters — despite populist calls to relax rules.

Voting in the Netherlands' national election begins on Monday, with polling stations set to remain open for three days to ensure social distancing for COVID-vulnerable voters.

Polling stations will open mainly for at-risk people on Monday and Tuesday before the main election day on Wednesday.

Opinion polls show Prime Minister Mark Rutte and his liberal People's Party for Freedom and Democracy (VVD) on course to win a fourth term as the head of a coalition government.

Christian Democrat leader Wopke Hoekstra told public broadcaster NPO1 on Sunday evening that he would prefer to remain in a coalition with Rutte.

Contesting the poll are a record 37 parties for the 150 seats in the Dutch parliament's lower house, making formation of a new coalition complicated.