A Dutch Internet cartoonist was arrested and then released again on suspicion of publishing work that is discriminatory against Muslims and people of color, Amsterdam police disclosed on Friday, May 16. 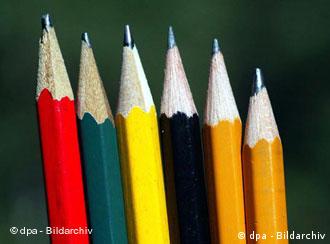 "The pen(cil) is mightier than the sword," said British playwright Edward Bulwer-Lytton

A police spokesman said authorities searched the cartoonist's home, that the arrest took place Wednesday, and the artist was released a day later.

The spokesman could not confirm whether the cartoonist, who goes by the artistic name Gregorius Nekschot -- Dutch for "shot in the neck" -- would be charged by the public prosecutor.

"He was arrested with a great show of force, by around 10 policemen," a spokeswoman for publisher Uitgeverij Xtra told the Associated Press on Friday. She asked that her name not be used because the cartoonist and publisher have received death threats.

Nekschot is known primarily for cartoons mocking Muslims and leftists, though the spokeswoman said he is a satirist who targets "any strong ideology."

The arrest follows an investigation by the public prosecutor after Imam Abdul Jabbar van de Ven, a well-known Dutch convert to Islam, filed a complaint about Nekschot's cartoons in 2005.

Nekschot's work is primarily published on the Internet. His Web site divides his work over more than 10 categories, including "science" and "modern life." Most of Nekschot's cartoons feature Muslims and people of color.

Racial and religious tension has been high in the Netherlands since a Danish newspaper published 12 cartoons depicting the Muslim Prophet Mohammed in September 2005. The publication and subsequent republication sparked demonstrations and riots in several countries.

While Muslim leaders in Europe have expressed their unhappiness over what they call two artistic "provocations," there has been none of the violent reaction that some had feared would ensue. (31.03.2008)

In a new message, al Qaeda leader Osama bin Laden warned Europe of a "reckoning" for publishing caricatures of the Prophet Mohammed. Intelligence officials said there was no indication when a possible attack might occur. (20.03.2008)

Authorities shut down internet and restricted gatherings in the western Indian town after a widely-circulated video showed two men slitting a tailor's throat. It comes amid widespread religious tensions in India.