German Minister Calls on EU Press to Publish Mohammed Cartoon | Europe | News and current affairs from around the continent | DW | 27.02.2008

More European newspapers should publish the hotly disputed Mohammed cartoons, said German Interior Minister Wolfgang Schaeuble as violent protests broke out in Sudan over the recent reprinting of the caricatures. 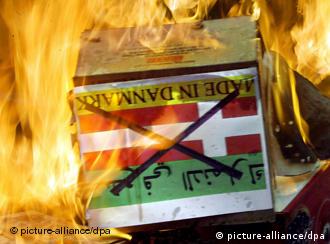 "All European newspapers should print the [Mohammed] caricatures with the explanation, 'We also think they're pathetic, but the use of press freedom is no reason to resort to violence," Schaeuble told the weekly edition of Die Zeit.

The minister added that he "respected" the decision of 17 Danish newspapers earlier this month to reprint a cartoon depicting the Prophet Mohammed with a turban that resembled a bomb with a lit fuse. The re-publication came a day after Danish authorities uncovered and foiled a plot to murder the cartoonist whose drawing first appeared in 2005. 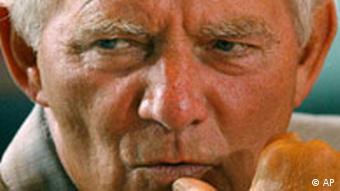 Schaeuble's statement coincided with protests in Sudan over the reprinting. In a demonstration organized by numerous Islamist movements, some 10,000 people marched through Khartoum on Wednesday, Feb. 27.

The protestors demanded that diplomatic ties with Denmark be severed and expressed support for a boycott on Danish products declared by the Sudanese government on Monday.

"Bin Laden strike again" and "Jews, Jews, the army of Mohammed is coming back," shouted the marchers.

Since the cartoon was reprinted two weeks ago, similar protests have been held in Iran and Egypt.

The initial publication of 12 similar Mohammed cartoons in a Danish newspaper in 2005 outraged the Muslim world and led to a series of violent demonstrations. In early 2006, Danish diplomatic buildings were torched in Damascus and Beirut and dozens of people were killed in Nigeria.

Authorities near the city of Aarhus said they had taken a group into custody for plotting to kill the artist who drew the most controversial of the images. But the cartoonist continues to live in fear for his life. (12.02.2008)

A Paris court on Thursday acquitted the editor of a satirical French weekly, sued by two Muslim groups for publishing cartoons of the Prophet Mohammed. (22.03.2007)

Do you agree with Wolfgang Schaeuble that more European newspapers should reprint the Mohammed cartoons? Please include your name and country in your reply.