The German composer found out he had won an Academy Award for his "Dune" score from a hotel room in Amsterdam. Currently on tour, the prolific musician broke an unusual record with his second win. 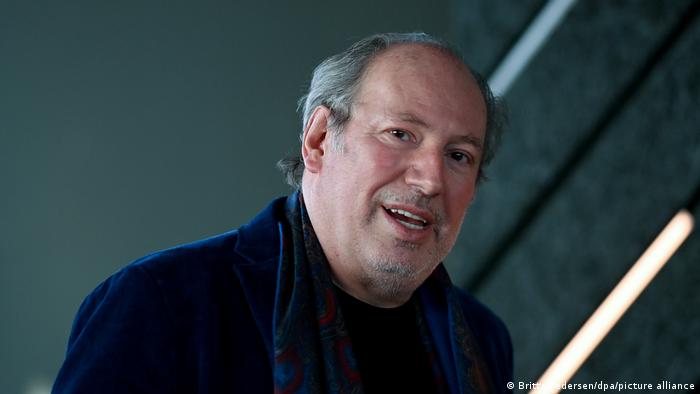 Acclaimed German composer Hans Zimmer, who wrote the film scores of more than 200 movies, won his second Oscar for "Dune," following his first Academy Award for "The Lion King" (1994).

Currently on tour across Europe, Zimmer was not at the Los Angeles event to accept the award, but rather in a Dutch hotel.

He tweeted a photo showing him still in his bathrobe, holding the statuette: "It's 2am in Amsterdam, and my daughter Zoë woke me up to go to the hotel bar. Wow!"

In another video showing his reaction to the award, he joked about his pajamas, but also thanked the musicians who are touring with him and who contributed to the soundtrack.

On tour with Ukrainian musicians

His current tour, "Hans Zimmer Live," had been postponed due to the COVID pandemic, and finally began shortly after Russia launched its war in Ukraine.

Adding a poignant and timely note to the series of arena concerts, the ensemble — booked before the pandemic started — happens to include musicians from the Ukrainian city of Odesa.

During the concert, the orchestra performs a piece from the "Wonder Woman 1984" score, which is dedicated to the "real wonder women of the war in Ukraine," the female soldiers fighting for their country.

Becoming a musician is not about formal lessons

Born in Frankfurt, in former West Germany, on September 12, 1957, Zimmer is a self-taught musician, as he didn't like the discipline of the piano lessons he briefly took as a child.

He believes learning music doesn't begin with formal teaching: "I don't know when one starts being a musician. If ever you hear a musician say, 'I started at the age of six,' he's lying. We start out as musicians as soon as we hear music in our heads," he told DW in an interview ahead of his 60th birthday.

He says he has always been attracted to music and decided he would compose film scores after watching Sergio Leone's "Once Upon a Time in the West," with music by the late Ennio Morricone at the age of 12: "I remember thinking, this is what I want to do!"

After composing advertising jingles, Zimmer moved on to film scores by partnering with Stanley Myers (1930-1993), another prolific film composer.

Zimmer's major breakthrough came with his score for the award-winning film "Rain Man" (1988). Since then, the composer has written the music for more than 200 films, including "Gladiator," the "Pirates of the Caribbean" series, "The Dark Knight" trilogy and "Dunkirk."

Beyond his two Oscars, he has won three Golden Globes, three Grammys, as well as a Tony and an American Music Award — collecting many more nominations along the way.

But even though his 12 Oscar nominations are impressive, the actual record Zimmer broke on Sunday with his second win is that he became the composer to have waited the longest to win a second film score Academy Award, which came 27 years after "The Lion King."

Found a 'soulmate' in Denis Villeneuve

Like Canadian director Denis Villeneuve, Zimmer shares a passion for Frank Herbert's novel "Dune," which he describes as one of his favorite books from his youth.

In his video on Twitter, Zimmer paid tribute to the filmmaker, saying that he "had found a soulmate" in Villeneuve. "He starts a sentence, I finish it; I start a sentence, he finishes it," he said.

The director and composer, who had already worked together on "Blade Runner 2049" (2017), are pursuing their collaboration with "Dune: Part Two," which is set to be released in 2023.