Driver rams into crowd in Jerusalem amid unrest

A border policeman has been killed after a driver rammed into a crowd in central Jerusalem. The attack comes amid a Palestinian uprising in the Old City over access to the Al-Aqsa mosque. 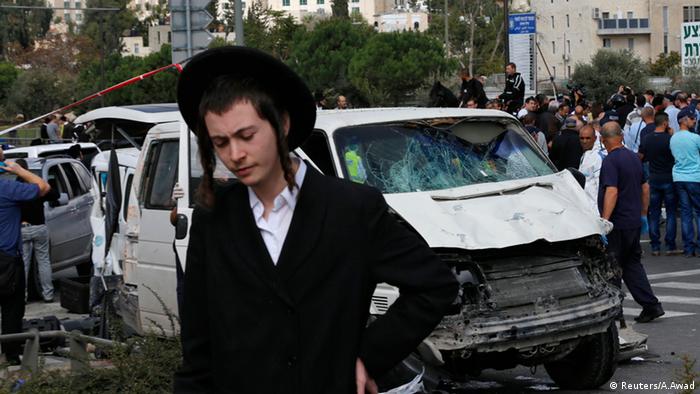 A Palestinian man rammed his car into pedestrians in central Jerusalem on Wednesday, killing a policeman and fuelling concerns that an uprising among Palestinians could intensify in the Old City.

The driver was shot dead by police and was identified by an Israeli security official as Ibrahim Akari from East Jerusalem. Following the attack, the Islamist group Hamas claimed responsibility for what it called a "heroic running-over operation."

With anger spreading in Jerusalem over access to a compound housing Islam's third-holiest site, the Al-Aqsa mosque, neighboring Jordan denounced what it described as Israel's "violations" in the city and said it had recalled its ambassador from Tel Aviv.

Unrest in the Old City

Earlier, police dispersed dozens of masked Palestinians who were gathered around the mosque, after they had thrown rocks and firecrackers at officers, according to Israeli authorities.

"Police entered the area, pushed the masked rioters back, and they fled back into Al-Aqsa. Police closed the front gate of the mosque but did not enter," the Reuters news agency quoted police spokesman Micky Rosenfeld as saying.

For weeks, there have been daily clashes between Israeli security forces and Palestinians in East Jerusalem and the Old City, stoking fears of a new Palestinian uprising. Last week, a Palestinian shot and injured an ultranationalist American-Israeli who was protesting a ban on Jews at the site, prompting Israeli forces to close it down. Known as the Temple Mount, it is the holiest site for Jews and the third-most important for Muslims, who refer to it as the Noble Sanctuary.

Fresh clashes have broken out between Israeli police and masked Palestinians at a holy site in Jerusalem. The clashes come as Amnesty International released a report accusing Israel of war crimes. (05.11.2014)

Israel has closed a contested Muslim-Jewish holy site in Jerusalem following the shooting of a Jewish ultranationalist. Palestinian leader Mahmoud Abbas has condemned the move as a "declaration of war." (30.10.2014)