Fresh clashes have broken out between Israeli police and masked Palestinians at a holy site in Jerusalem. The clashes come as Amnesty International released a report accusing Israel of war crimes. 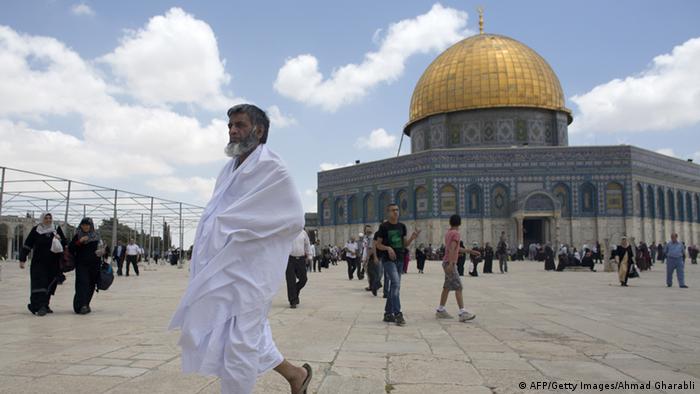 The human rights organization Amnesty International issued a damning report on Wednesday, accusing Israel of war crimes during the 50-day war in Gaza.

"Israeli forces have brazenly flouted the laws of war by carrying out a series of attacks on civilian homes, displaying callous indifference to the carnage caused," said Philip Luther, director of Amnesty's Middle East and North Africa program.

In a number of instances, the report found, no warning had been given to civilians prior to attacks. "The report exposes a pattern of attacks on civilian homes by Israeli forces which have shown a shocking disregard for the lives of Palestinian civilians, who were given no warning and had no chance to flee," Luther said.

In the war, which ended in August, more than 2,100 Palestinians, mostly civilian, were killed. Sixty-six Israeli soldiers and six civilians inside the country were killed.

Israel has rejected the report, saying that it "ignores documented war crimes perpetrated by Hamas."

"The report does not mention the word terror in relation to Hamas or other armed Palestinian groups, nor mentions tunnels built by Hamas to infiltrate Israel and perpetrate terror attacks," the Foreign Ministry countered.

Israel says it was as careful as possible to avoid civilian deaths and that it used a warning system before bombings when possible. It argues that the heavy civilian death toll was Hamas' fault. Israel accuses the group of using civilians as human shields and launching rockets from schoolyards, residential areas and mosques.

Unrest in the Old City

Meanwhile, police dispersed dozens of masked Palestinians at a sensitive holy site in Jerusalem's Old City on Wednesday after they threw rocks and firecrackers at officers, according to Israeli authorities.

The news agency AFP quoted police spokeswoman Luba Samri as saying: "Dozens of masked protesters threw stones and firecrackers at security forces who then entered the Temple Mount and pushed the demonstrators back inside the mosque."

"Police entered the area, pushed the masked rioters back, and they fled back into Al-Aqsa. Police closed the front gate of the mosque but did not enter," the Reuters news agency quoted police spokesman Micky Rosenfeld as saying.

Omar Alkeswani, a Palestinian manager of Al-Aqsa, said that police had entered the compound and the ensuing clash wounded 20 people.

Clashes quickly spread into nearby alleys, according to an AFP reporter, at a time when many children were on their way to school.

For weeks, there have been daily clashes between Israeli security forces and Palestinians in East Jerusalem and the Old City, stoking fears of a new Palestinian uprising. Last week, a Palestinian shot and wounded an ultranationalist American-Israeli Yehuda Glick, prompting Israeli forces to close down the site, which for Jews is the No. 1 holy site and is called the Temple Mount and for Muslims is the third-most important place and called the Noble Sanctuary.

In a bid to calm the situation, Israeli Prime Minister Benjamin Netanyahu said on November 2 that Jews would not be allowed to worship at the Muslim-run site. Ultranationalist Israelis had been demanding the right to pray there.

Also on Wednesday, there were reports that a person had driven a car into Israeli police officers and civilians in an apparent attack in East Jerusalem. Reuters news agency said the incident had caused many casualties.

Sweden has announced that it will officially recognize the state of Palestine on Thursday. It will become the first EU member in western Europe to do so, in a move strongly condemned by Israel. (30.10.2014)

Recognizing Palestine 'helps peace above all'

Sweden has become the first Western EU country to officially recognize Palestine, and has taken a lot of flak for it. Palestinian political scientist Usama Antar says it's the right move. (31.10.2014)

UN head Ban Ki-moon has made a brief trip to war-ravaged Gaza, following pledges by an international donor conference to rebuild the territory after a devastating Israeli offensive this past summer. (14.10.2014)