Rebels in the east of DR Congo have killed at least 25 people, beheading some, local officials say. Fighters from the Allied Democratic Forces have been blamed for the attack on New Year's Eve. 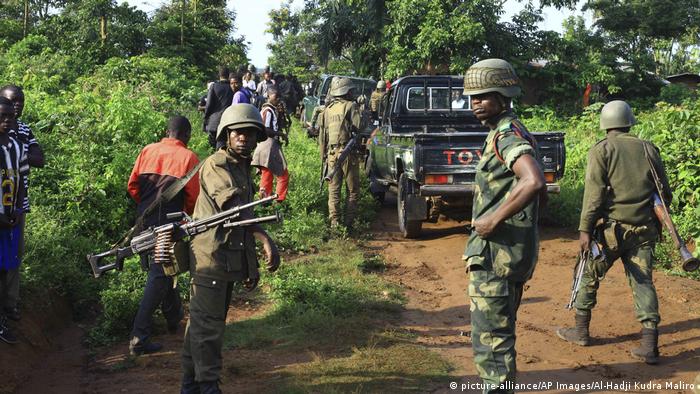 DRC soldiers on patrol in Beni in 2018

At least 25 people were killed on New Year's Eve in a rebel attack in the Democratic Republic of Congo's Beni territory in North Kivu province, local officials said Friday.

The killings occurred in the village of Tingwe, about 8 kilometers (5 miles) from the town of Eringeti. Local officials said farmers were working in their fields when they were attacked by the Allied Democratic Forces (ADF), a militia that has killed hundreds of civilians over the past year.

Bravo Muhindo, a civil society representative, put the death toll at a minimum of 30, saying many were beheaded. An unknown number of others were kidnapped.

"People had gone to their fields to prepare for New Year's Eve; the ADF picked them up one by one," said Muhindo.

"We alerted our forces that the ADF had passed through from the east to the northeast of Eringeti. They did not respond quickly," he added.

Sabiti Njiamoja, the representative of the governor in the region, said, "We are in mourning."

The ADF began in neighboring Uganda in the 1990s. The group has been blamed for killing about 800 civilians last year in  North Kivu province, which shares a border with Uganda.

The rebel group has never claimed responsibility for attacks. The local affiliate of the extremist "Islamic State" group has claimed some attacks that were carried out by the ADF, but the relationship between the groups is not clear.

The ADF is just one of many militias operating in the DRC's eastern provinces. Many of them were formed from the remnants of groups that fought in the country's civil wars in the late 1990s and early 2000s.