Chinese authorities are searching for 32 people missing after an oil tanker collided with a cargo ship in the East China Sea. The tanker burst into flames and spilled oil from the near 1 million barrels it was carrying. 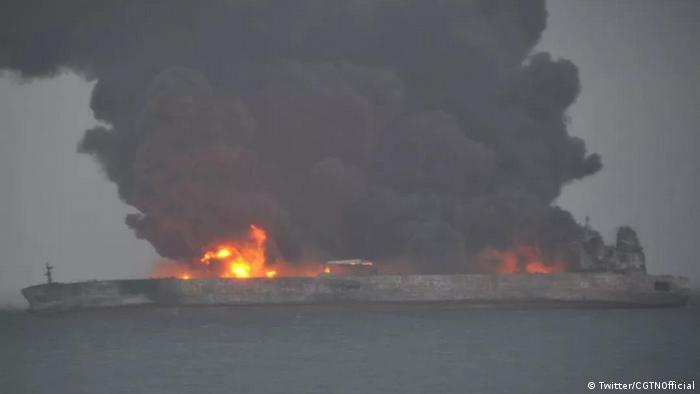 An oil tanker's crew — including 30 Iranians and two Bangladeshis — was still unaccounted for on Monday, two days after the vessel crashed into a Chinese bulk freighter off the coast of Shanghai.

The Panama-registered tanker spilled oil and was "completely lost to fire," according to China's Transport Ministry.

The vessel, which was travelling from Iran to South Korea, crashed about 250 kilometers (160 nautical miles) off the coast near Shanghai and the mouth of the Yangtze River Delta on Saturday evening.

The tanker, named Sanchi, was leaning heavily to one side on Sunday and was threatening to capsize, while bad weather and fire hampered rescue efforts on and around the ship, Mohammad Rastad, head of Iran's Ports and Maritime Organisation, told Iranian television.

China sent eight ships to help with rescue operations and to try to contain the spill, while South Korea dispatched a coast guard ship and a rescue plane.

The US Navy said it had also sent a military aircraft to try and find the missing crew. The search area totals about 12,350 square kilometers (3,600 square nautical miles).

The stricken tanker was transporting 136,000 metric tons (150,000 tons, or nearly 1 million barrels) of oil condensate, a type of ultra-light oil, worth around $60 million based on current global crude oil prices.

To compare, the Exxon Valdez was carrying 1.26 million barrels of crude oil when it spilled 260,000 barrels into Prince William Sound off Alaska in 1989, in the second largest oil spill in American history.

The Hong Kong-registered cargo ship, which was carrying grain, suffered some damage but "without jeopardizing the safety of the ship," the ministry said. The 21 Chinese crew aboard the Crystal were rescued.

Dozens of people have been killed after a Nigerian fuel tanker crashed into a busy bus station in the country's southeast. Nigeria is nearly entirely reliant on gasoline imports to meet its fuel needs. (01.06.2015)

Local rescue officials say that at least 150 people have died on a Pakistan highway after an oil tanker turned over and caught fire. The oil spill engulfed scores of people who had rushed to collect leaking fuel. (25.06.2017)

Dozens of people have been killed after an oil truck exploded in South Sudan. The accident happened when a crowd tried to gather fuel from the vehicle after it had broken down. (17.09.2015)