Dozens of people are reported to have been killed when a car bomb went off in the Syrian city of Homs. Meanwhile, the world’s chemical watchdog is to investigate the alleged recent use of chlorine gas in the conflict. 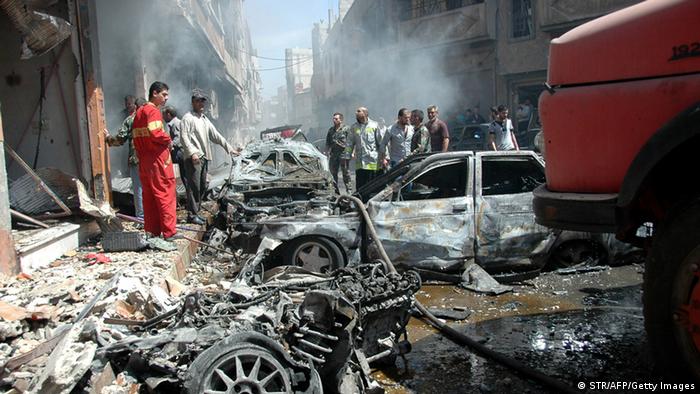 At least 36 people were killed and dozens of others injured when a bomb planted in a car detonated in Homs on Tuesday, according to government officials cited by news agencies.The London-based Syrian Observatory for Human Rights put the death toll at 37. These figures could not immediately be independently confirmed.

A government official said the bomb went off in the Zahra dictrict of the city, where most of the inhabitants are of the Alawite sect, an offshoot of Shiite Islam to which President Bashar al-Assad also belongs.

Most of the victims are reported of have been civilians and provincial Governor Talal al-Barazi told the news agency AFP that the high death toll was because "the Abbasiya area where the bomb detonated was crowded with pedestrians."

The car bombing came just hours after a mortar attack on Damascus killed at least 14 people, according to state media.

Meanwhile, the Organisation for the Prohibition of Chemical Weapons has announced that it will send a team of investigators to Syria to look into recent allegations regarding the possible used of chlorine gas in the conflict.

According to a statement released by the OPCW on Tuesday, the organization's director-general, Ahmet Uzumcu, told a meeting of its executive council that the new mission would seek "to establish facts surrounding allegations of use of chlorine."

The statement added that the Syrian government had agreed to the mission and "has undertaken to provide security in areas under its control."

The OPCW is already involved in an operation to remove Syria's chemical weapons under a deal in which it pledged to hand over its entire arsenal to avoid threatened US air strikes.

Syrian President Bashar al-Assad had registered to run for re-election. Although he is one of seven candidates, he is widely expected to win. (28.04.2014)