Dozens of people have been killed in multiple bombings at a campaign rally in Baghdad, just days before Iraq’s parliamentary election.The Islamic State of Iraq and the Levant claimed responsibility for the attack. 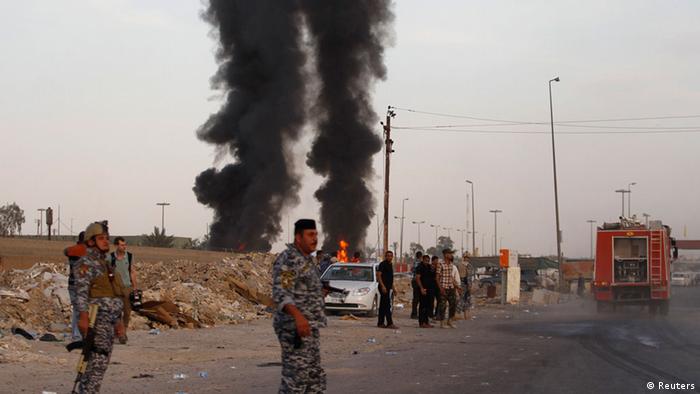 At least 25 people were killed and a similar number wounded after at least two explosions hit a campaign rally for a Shiite political party in the Iraqi capital on Friday.

In a statement posted on a militant website, the Islamic State of Iraq and the Levant (ISIL) claimed responsibility for the attack. ISIL said the bombings were retribution for the killing of Sunnis by Shiites.

Several thousand supporters of the Sadiqun bloc, the political wing of the Asaib Ahel al-Haq militia, were in the Industrial Stadium in eastern Baghdad when the attack occurred.

The AFP news agency quoted an interior ministry spokesman who said the blasts had been caused by a car bomb followed by a suicide attack.

Some sources said there had actually been three explosions and that the death toll was as high as 28.

The attack is just the latest to hit Iraq in the run-up to the country's parliamentary election, to be held next Wednesday.

Last year, violence in Iraq rose to its highest level since the sectarian violence that gripped the country between 2006 and 2008. According to United Nations figures, more than 8,800 people were killed in 2013 and more than 1,400 in the first two months of 2014.

The US is increasing the number of its intelligence officers in Iraq to help Baghdad combat ISIL, according to Reuters news agency, which cited anonymous government officials. Washington occupied Iraq for eight years after overthrowing dictator Saddam Hussein in 2003.

Despite the ongoing bloodshed, Shiite Prime Minister Nuri al-Maliki is seeking to win a third term in office in the April 30 vote.

One of Iraq's main political blocs is in question after influential Shiite Muslim cleric Muqtada al-Sadr announced his retirement from politics. The move comes two months before national elections. (16.02.2014)

Violence is on the rise in Iraq. Hostilities between Sunnis and Shiites are at a peak: The number of victims is higher than it has been for years, and the upcoming election campaign may well make things worse. (29.10.2013)