One of Iraq's main political blocs is in question after influential Shiite Muslim cleric Muqtada al-Sadr announced his retirement from politics. The move comes two months before national elections. 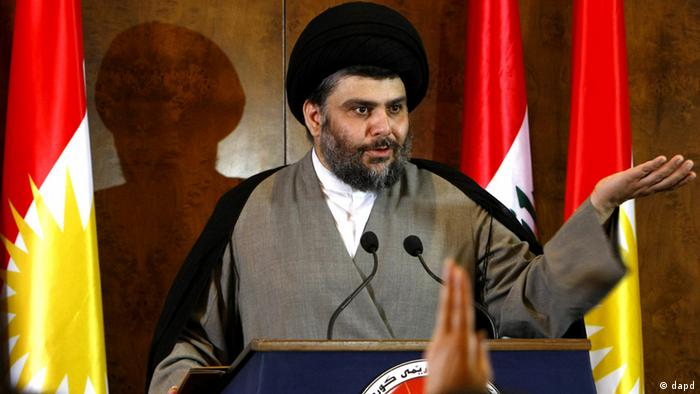 Sadr posted a handwritten note on his website announcing his retirement. The note gave no specific reason.

One of Iraq's most influential Shiite clerics who led revolts against US forces in Iraq before their withdrawal in 2011, Sadr has made such announcements before. But if confirmed as permanent, it brings to an end a political career that spanned more than a decade and one which had a major influence on the government.

Sadr also dissolved his political movement and distanced himself from any that uses his name.

"I announce here that I will not interfere in politics. There is no political entity that represents me anymore nor any position in parliament and government," the statement read. "Whoever acts against this will be subjected to legal and religious action."

Sadr said his move was to protect the reputation of the al-Sadr family and end "all the wrongdoings that were conducted, or could be conducted, under their title."

The statement said the charitable and educational organizations run by Sadr would remain open.

Sadr's movement holds six cabinet posts and roughly an eighth of the seats in Iraq's parliament. It is not yet clear what impact the decision would have on its participation in elections scheduled for April, but it could work in favor of the incumbent premier.

"Sadr's decision will definitely play into the hands of Prime Minister [Nuri al-] Maliki in the next election in one way or another," said Ali Ameer, an Shiite religious affairs analyst speaking to Reuters.

Sadr backed Maliki for prime minister in both 2006 and 2010, despite criticizing him before and after the US troop withdrawal. The pair later fell out, with Sadr calling Maliki a "dictator" and accusing him of wanting to postpone or cancel elections.

In 2012, he called on the premier to resign, but Maliki ultimately survived the crisis.

Muqtada al-Sadr is the son of Mohammed Mohammed Sadiq. His father's killing in 1999, along with two of Muqtada's brothers, was widely blamed on then Iraqi president Saddam Hussein.

Sadr's political career began with his fiery criticism of the occupation of Iraq, after the US-led invasion in 2003. His Mahdi Army militia also repeatedly battled American forces and observers blamed it for playing a major role in Sunni-Shiite sectarian fighting in which tens of thousands of people died.

Sadr suspended the militia's activities in 2008 following a crackdown by security forces.