Warplanes from a Saudi-led coalition have bombed a headquarters for Houthi rebel troops in Yemen's capital Sanaa, killing more than 40 soldiers. The deadly attack comes after peace talks were indefinitely put on hold. 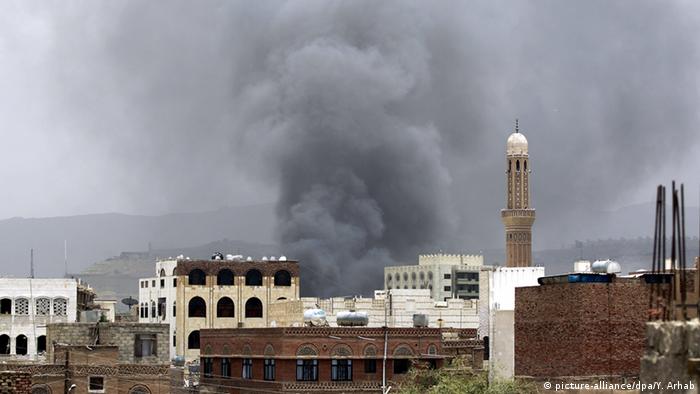 Hundreds of Yemeni soldiers allied with the Houthi rebel militia had reportedly gathered at the base in central Sanaa to collect weapons when the bombs struck Wednesday.

At least 45 members of the security forces were killed and 276 injured, according to the Houthi-controlled Heath Ministry. The strikes also demolished at least three buildings in the complex and caused extensive damage to armored vehicles and weapons stores.

The Shiite Houthis have been in control of Sanaa since September, when they overran the city's government institutions and buildings, forcing President Abed Rabbo Mansour Hadi into exile in Saudi Arabia.

Since then, the Houthis have managed to advance southwards, helped by tribal militias and Yemeni army units loyal to ousted former president Ali Abdullah Saleh.

A Saudi-led coalition of Gulf states launched airstrikes against the Houthis and their pro-Saleh allies on March 26 with the aim of restoring Hadi to power. They're concerned that Iran, which they say backs the rebels, could gain a foothold in the Arabian Peninsula.

The airstrikes have devastated rebel positions around the country, although they've ultimately failed to dislodge the Houthis from their recently-gained territory.

The Health Ministry said a further 96 people had been killed in strikes across the country on Wednesday. The northern Houthi strongholds of Saada and Hajjah were targeted, and a major attack was also launched against Yemen's largest naval base in the Red Sea city of Hodeida. There was no clear death toll, but a local official told Reuters large parts of the base had been destroyed.

"Two warships were hit, and one of them, named the Bilqis, was destroyed and sank onto its side, and five gunboats shelled the administrative buildings of the base," the official said.

The conflict, as well as the Saudi-led air and sea blockade of the impoverished country, has led to widespread shortages of fuel, water, food and medical supplies.

The United Nations is attempting to reschedule peace talks that were scrapped after Yemen's exiled government demanded the rebels withdraw from main cities they have seized before the negotiations begin. The United Nations had called for the talks to be held without preconditions.

Yemen's Houthi rebel-held capital Sanaa has been pummeled by Saudi-led airstrikes, two days after the expiry of a truce. Aid agencies say they have little time to deliver "desperately needed" food and medicines. (19.05.2015)

In Yemen, the death toll from a Saudi-led coalition airstrike on a prison run by rival Houthis has climbed to at least 82. The coalition denied targeting the facility. The attack marks an escalation in the country's seven-year civil war.