A crowded marget in Maiduguri was once again the scene of a deadly suicide bombing on Tuesday. The attacks bear the hallmarks of Nigerian militant group Boko Haram, which has been terrorizing northeastern Nigeria. 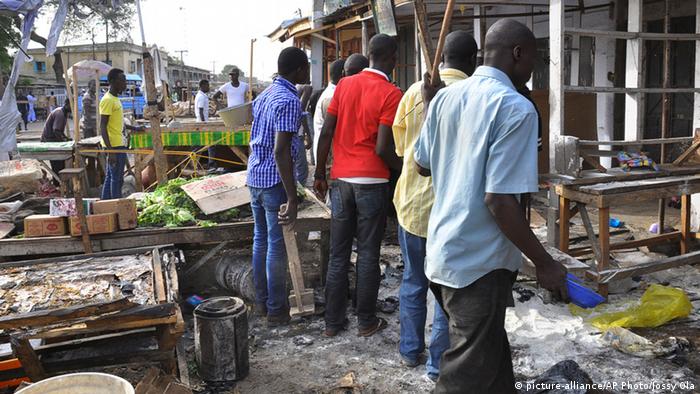 Dozens are feared dead after a female teenage suicide bomber detonated explosives at a crowded market in the northeastern Nigerian city of Maiduguri, authorities said Tuesday.

The blast occurred in the late afternoon in a market close to the city's Old Elkanemi Cinema. Reports on fatalities varied, but Musa Danbaba, a member of a civilian protection militia, told the Associated Press that 34 bodies had been counted and many more were injured.

"The place was very busy. Many people were waiting to pick up taxis and some were walking down the road when the blast occurred," witness Abdulaziz Olawale said, adding that he believed he had seen the charred and dismembered body of the bomber.

No group has claimed responsibility for the attack, but terror militia Boko Haram has conducted similar attacks in the region in the past. Just this past Saturday, suicide bombers detonated explosives in the same market, killing 54 people and wounding dozens more.

Maiduguri is home to some two million people and is the capital and largest city in Borno state. It is the birthplace of Boko Haram, which is seeking to establish a caliphate in northeast Nigeria. The terror militia last week announced its allegiance to the "Islamic State" in Iraq and Syria.

But Boko Haram has recently been put on the defensive after joint offensives by Chadian and Nigerian troops forced the terror militia out of some key towns in Borno state.

An estimated 13,000 people have been killed in violence caused by Boko Haram since 2009.