Borussia Dortmund's troubled run came to an end in the Champions League with a comfortable 3-0 win at Anderlecht. Leverkusen finally got their campaign off the mark with a 3-1 victory over Benfica. 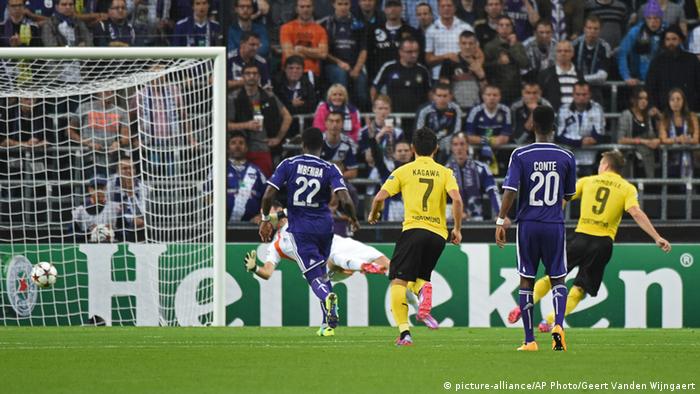 Borussia Dortmund and Bayer Leverkusen scored three goals each as they both won respective Champions League ties on Wednesday. Dortmund have still to concede a goal in the competition this season.

Jürgen Klopp's side - without a win in three domestically - secured a 3-0 win at Belgian side Anderlecht with Adrian Ramos bagging a late brace to tie up the points. Klopp decided to leave the Colombian out of the team with Shinji Kagawa returning to the fold and influencing the match right from the offset.

Kagawa carved open the opening goal within three minutes, deftly lifting the ball over the defense for Ciro Immobile who tucked home his second goal of the Champions League this season.

Dortmund controlled the proceedings, aside from one or two moments where Roman Weidenfeller was called into action from long-range. Pierre-Emerick Aubameyang failed to convert into an open goal a few moments after the opener, skewing his finish from a few yards out. 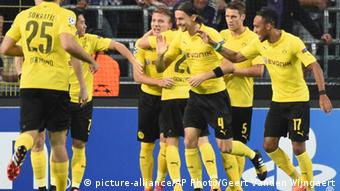 After a strong start to the season on the goal front, the Gabonese striker didn't have his shooting boots on before the break. In the 18th minute, he fired straight at keeper Silvio Proto, before dragging a right-foot strike wide of the post, four minutes later.

Anderlecht captain Proto blocked again in the 51st minute, as Aubameyang drifted to the left, shooting from a tight angle after combining well with Kagawa. Proto was beaten in the 68th minute when substitute Ramos reacted like a poacher to prod home Lukasz Piszczek's excellent cross.

Ramos' second effort on goal beat Proto at his bottom right-hand corner - Kagawa inspiring the attack; Aubameyang cutting back for the Colombian who finished for his second of the night in the 78th minute.

At the BayArena, Bayer Leverkusen completed an extremely positive evening for the Bundesliga clubs in the Champions League, beating Portuguese heavyweights Benfica by three goals to one.

After drawing a blank at the weekend in Freiburg, Roger Schmidt's side looked substantially sharper in attack with their two-banks-of-two pressing system. Midfielder Lars Bender hit the woodwork, 15 minutes into the match, but it was a matter of time before the deadlock was broken. 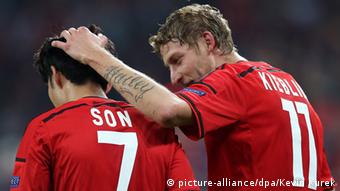 This par - Son and Kießling - netted in the Leverkusen win

Stefan Kiessling pounced inside the six-yard box to score in the 18th minute and five minutes later, Heung-Min Son swept in for a well-taken finish from 10 yards to make it 2-0.

Jorge Jesus' side had a surprisingly timid approach in attack, especially with talents such as Nicolas Gaitan and Eduardo Salvio. The latter struck in the 62nd minute to bring the Portuguese side back into the game after a slick passing move from right-to-left before Salvio smashed into Bernd Leno's bottom corner.

But within the space of a few seconds, Jardel pulled down Kiessling in the box and Hakan Calhanoglu restored the two-goal safety net for the German side.

Three of four German clubs this matchday collected maximum points, with Schalke the only side failing to win against Slovenian champions Maribor.