US President Donald Trump has derided a Democratic senator as "Pocahontas" during an event honoring Native American war veterans. The White House has denied the comment was a racial slur. 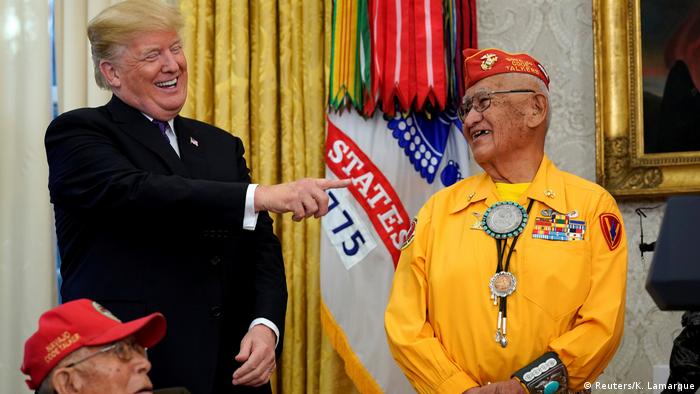 While Donald Trump met with Native American veterans at a White House event on Monday, he took the opportunity to mockingly refer to a Democratic senator as "Pocahontas."

"You were here long before any of us were here," Trump told a member of the group as he welcomed the three Navajo code talkers, who helped transmit secret messages during World War II. "Although we have a representative in Congress who they say was here a long time ago. They call her Pocahontas. But you know what, I like you."

Trump has repeatedly used the name of the famous 17th-century Native American to mock Massachusetts Senator Elizabeth Warren and her claims of having Native American ancestry, frequently criticizing her claims as a bid to further her academic career.

Warren, a prominent liberal Democrat and a legal scholar who taught at Harvard Law School, said in a 2012 interview with The Associated Press that her parents had told her about her Native American heritage.

"This was supposed to be an event to honor heroes, people who put it all on the line for our country, who, because of their incredible work, saved the lives of countless Americans and our allies," Warren said on broadcaster MSNBC on Monday.

"It is deeply unfortunate that the president of the United States cannot even make it through a ceremony honoring these heroes without having to throw out a racial slur." 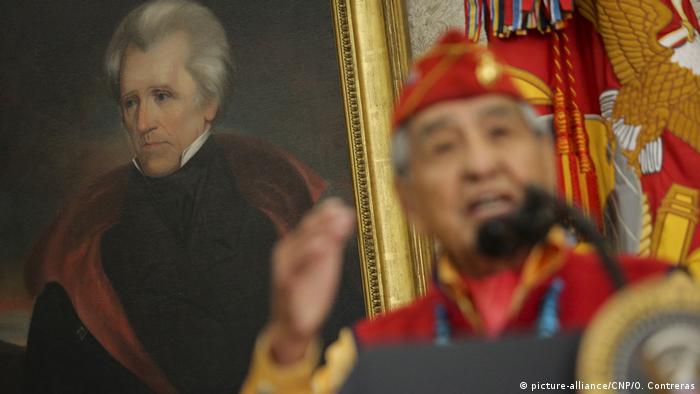 The meeting was held in front of a portrait of former President Andrew Jackson, who signed the Indian Removal Act in 1830

Native American leaders have previously called Trump's attacks on Warren offensive and distasteful. On Monday, the Alliance of Colonial Era Tribes, which represents Native American tribes that first came in contact with European settlers, denounced Trump for using a Native American name as a slur.

"American Indian names, whether they be historic or contemporary, are not meant to be used as insults. To do so is to reduce them to racial slurs," the group said.

The National Congress of American Indians said Trump's remarks had overshadowed the contributions of the veterans.

"We regret that the president's use of the name Pocahontas as a slur to insult a political adversary is overshadowing the true purpose of today's White House ceremony," said the group's president, Jefferson Keel.

"We honor the contributions of Pocahontas, a hero to her people, the Pamunkey Indian Tribe in Virginia, who reached across uncertain boundaries and brought people together. ... Once again, we call upon the president to refrain from using her name in a way that denigrates her legacy."

Also attracting criticism was the fact the ceremony with the code talkers was held beneath a portrait of controversial president Andrew Jackson, who in 1830 ordered the forced removal of Native Americans from their ancestral land, causing thousands to die.

Fight for control of US consumer watchdog

Trump's latest comments came as his administration faced controversy over the Consumer Financial Protection Board, which Warren helped develop before entering politics.

On Friday, Trump named his budget director as the interim head of the agency, after its outgoing chief named someone else to the job, setting up a court battle.