US President Donald Trump has rejected claims that he sexually harassed several women before becoming president. On Monday, three of Trump's accusers reiterated their claims. 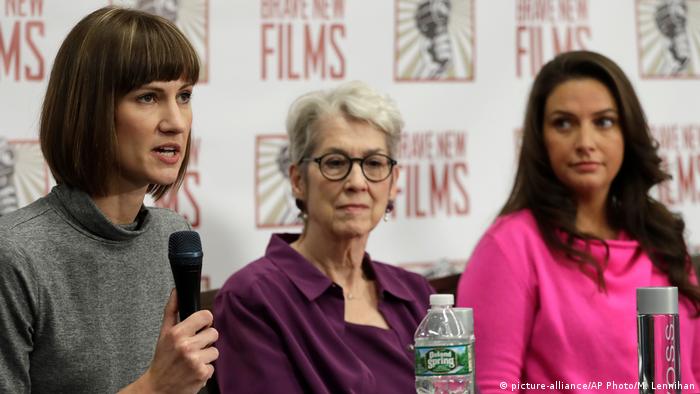 Three women who have previously accused President Donald Trump of sexual misconduct renewed their claims on Monday, calling for a congressional investigation into his behavior.

Rachel Crooks, Jessica Leeds and Samantha Holvey (pictured above) said at the news conference that they were speaking up again because of the current climate that has emboldened women to speak up about sexual misconduct.

"The environment's different," said Holvey, who claims Trump came backstage when she and other contestants were dressing at the 2006 Miss USA pageant. "Let's try again."

Trump took to Twitter on Tuesday to deny the accusations. He tweeted that he was the target of "false accusations and fabricated stories of women who I don't know and/or have never met."

Trump said the Democrats had been "unable to show any collusion with Russia" and were "moving on" to these allegations. He then finished the tweet with: "FAKE NEWS!"

White House spokeswoman Sarah Huckabee Sanders had previously discussed the accusations, telling reporters that the president "has addressed these accusations directly and denied all of these allegations.

"This took place long before he was elected to be president and the people of this country had a decisive election, supported President Trump," Sanders said. "We feel like these allegations have been answered through that process."

Democratic Senator Kirsten Gillibrand on Monday called on Trump to resign, after two other Senate Democrats made the same call a day earlier.

"President Trump has committed assault according to these women," Gillibrand told CNN. "And those are very credible allegations."

Trump also lashed out at Gillibrand via Twitter on Tuesday. Trump said the senator was a "total flunky for Chuck Schumer," the minority Democratic Party Senate leader.

He said Gillibrand, "who would come to my office 'begging' for campaign contributions not so long ago (and would do anything for them), is now in the ring fighting against Trump."

Democratic Senators Cory Booker of New Jersey and Jeff Merkley of Oregon both called over the weekend for Trump to quit.

Democrat Chris Coons, a member of the Senate Judiciary panel, said it was unlikely the Republican-controlled Congress would act on the accusations, which were known before the November 2016 presidential election.

"My hunch is it gets reviewed at the next election," Coons told CNN.

Women 'should be heard'

Crooks, Leeds and Holvey spoke at a news conference in New York on Monday, as nonprofit filmmaker Brave New Films introduced a video featuring 16 of Trump's accusers. In the film, women accused Trump of kissing them without permission, grabbing their private parts, putting his hand up their skirts, or making other unwanted advances.

Crooks, who says Trump forcibly kissed her on the mouth after she introduced herself to him at Trump Tower in 2005, urged lawmakers to "put aside their party affiliations and investigate Mr. Trump's history of sexual misconduct."

"We will hold Mr. Trump to the same standard of Harvey Weinstein and the other men who were held accountable for their reprehensible behavior."

Leeds, who says she was groped and forcibly kissed by Trump on a commercial flight decades ago, said Trump has not been held accountable for "what he is and who he is."

The president boasted in a "Access Hollywood" tape that surfaced in the final weeks of the 2016 election campaign that he could kiss and grope women with impunity, because of his celebrity.

Nikki Haley, the US ambassador to the United Nations, said Sunday that any women claiming to be victims of sexual harassment — including those implicating Trump — "should be heard."

Many women have come out publicly to accuse powerful men in the worlds of entertainment, the media, business and politics of sexual abuse and harassment, in the wake of allegations against Hollywood producer Harvey Weinstein earlier this year.

A US judge has denied a bid by the Trump administration to delay the introduction of transgender military recruits. Openly transgender recruits will be able to join the military as of January 1. (12.12.2017)

National Republicans are again supporting embattled US Senate candidate Roy Moore. President Donald Trump has even formally endorsed him despite reports from several women that he molested them while they were teenagers. (05.12.2017)

A woman who claimed US President-elect Donald Trump kissed and groped her against her will has filed a defamation lawsuit. If the case goes to trial, it could lead to the release of damaging information about Trump. (18.01.2017)