US President Donald Trump and North Korean leader Kim Jong Un have begun their second summit in Vietnam. The leaders met for the first time in Singapore in June 2018. 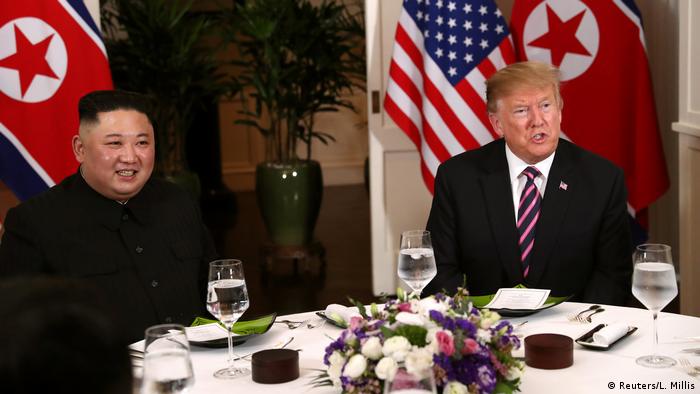 US President Donald Trump said he had a "very good dialogue" with North Korean leader Kim Jong Un as they kicked off their second summit in Vietnam on Wednesday.

"A lot of things are going to be solved I hope," Trump said at a dinner with Kim. "I think it will lead to a wonderful, really a wonderful situation long-term."

Kim said that his country had been "misunderstood" and viewed with "distrust."

"There have been efforts, whether out of hostility or not, to block the path that we intend to take," he said.

"But we have overcome all these and walked toward each other again and we've now reached Hanoi after 261 days," referring to their first meeting in Singapore. "I am confident that we can achieve great results that everyone welcomes."

The two leaders are expected to hold a "joint agreement signing ceremony" on Thursday, according to a White House itinerary. The details of these agreements are not yet known.

Ahead of talks, Trump expressed his belief that there was "awesome" potential and a "great opportunity" for North Korea if it committed to denuclearization.

"Vietnam is thriving like few places on earth. North Korea would be the same, and very quickly, if it would denuclearize," Trump wrote on Twitter.

"The potential is awesome, a great opportunity, like almost none other in history, for my friend Kim Jong Un," Trump continued, adding that "we will know very soon."

The president is trying to use economic incentives to convince North Korea to follow through on its denuclearization pledge.

But so far, Trump has made little progress in getting North Korea to agree to get rid of its weapons programs.

Read more: Stakes are high for US to show progress on North Korea

Trump said late last year that he and Kim "fell in love," and on the eve of his departure for the second summit, he said they had developed "a very, very good relationship."

South Korea on Wednesday appeared to relax its expectations of the meeting between Trump and Kim, saying any progress made in Hanoi would be a positive development.

Government spokesman Kim Eui-kyeom said it would be unfair to call the summit a failure if it fell short of making "big deals," saying "small deals" can be keys that open up bigger agreements later.

"A thousand-mile journey begins with the first step," he said.

The leaders of North Korea and the United States have arrived in Vietnam for their second highly anticipated face-to-face meeting. Trump has said the US is still pursuing the denuclearization of the hermit country. (26.02.2019)

Building bridges: How sport is bringing North and South Korea closer together

On Friday, representatives of North and South Korea are to brief the IOC president on plans for their joint bid to host the 2032 Olympics. The ice between the two Korean states is slowly melting – thanks to sport. (14.02.2019)

How to do scientific research in — and with — North Korea

Politically, North Korea is isolated. Scientifically, less so. An active volcano and plans for a new observatory are showing how cooperative research works there (and where it doesn't). (25.02.2019)